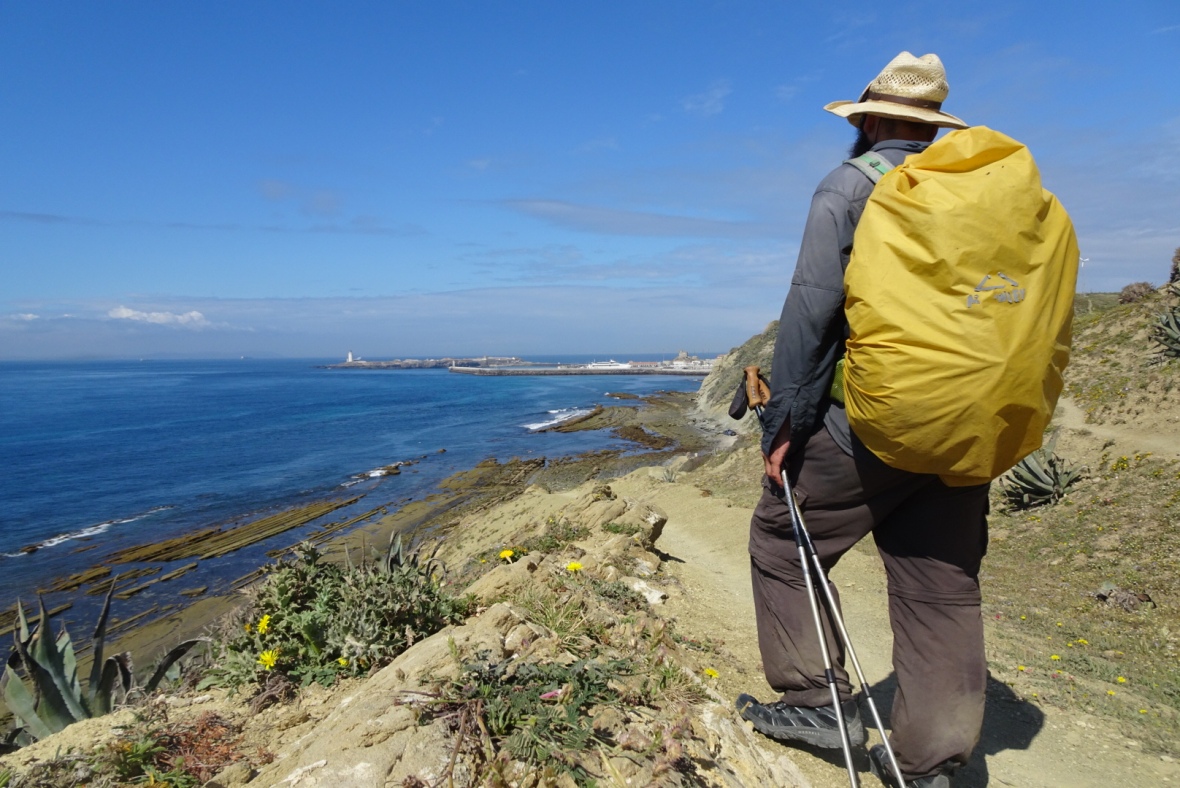 I had last night planned out perfectly in my head. Find a quiet place to tuck into somewhere along the coast. Sleep under the stars. Watch lights in Africa glow across the straight in the darkness. Wake before dawn and walk to the southern point before crowds arrive to take pictures. Say goodbye to the journey alone as the sun rises.

It was a good plan until I stopped to look at the sign.

It was the first sign I saw with Tarifa printed out on it. I knew I was close, my maps and Africa across the water told me that, but seeing the name printed in black letters dragged Tarifa out from my imagination and placed it into the world.

It felt too easy.

The sign hasn’t changed overnight. It still reads the same. Tarifa: 10km. I stop to look at it again, laughing. I had to take a picture, didn’t I?

I stare at the black letters and the pointing arrow. I did have to take a picture yesterday when I first reached it. How could I not with the words Tarifa finally spelled out before me?

The sign is tall, built for riders to see from horseback. I had to set up my camera and zoom in to try to frame the shot. Then I had to fidget with it, move the camera a bit, and fidget with it again until I got it right. That’s where Luce found me, fidgeting with a camera.

She was coming up her driveway with her friend Irma, taking her big German shepherd for a walk. The dog arrived first, calm, sniffing the camera and then my hand before meandering away as Luce reached the road. She asked where I was from then switched from Spanish to English after I answered.

“You should go meet my husband,” she said in a French accent, pointing down the driveway. “He’s at the house, just go say hello, he’d love to talk to you.”

She never asked exactly what I was doing. She didn’t know I’d walked across a continent to reach the end of her driveway. She only saw a tired stranger with his worn backpack and invited me to rest for a moment in the shade.

“So what’s his name?” I asked as I turned down the driveway​.

“Michel,” she called out after me.

He greeted me like an old friend when I stumbled into their garden calling his name. He pulled chairs out on the patio and poured me a glass of cold water. Luce and Irma came back from their walk after a little bit and joined us. An hour later, as the sun began dropping toward the horizon, they said the road to Tarifa was far too dangerous to walk at night. There are too many rocks. I could fall. The morning would be much safer.

I smiled and nodded.

We had dinner on the outside patio. Luce clipped fresh sage from the garden and showed me how to sauté it in olive oil to pour over pasta. We watched the sunset turn Africa’s grey rocks red across the straight. I slept on their spare bed in the study, surrounded not by stars and ocean, but by walls of books.

The sign almost smiles at me in the daylight. I don’t take a picture with it this time. I glance up one last time then walk on along the coast in the morning light. The distance remains the same, just ten kilometers left.

There was something painfully sweet about sitting around the table with Luce, Irma, and Michel as the night wore on. I’d catch myself looking around at their faces and seeing​ a hundred more behind each one. I saw Miriam’s mom showing me how to cook spaetzle and Moni sending me off from Freiburg with half a cheesecake in my pack. There was Oddbjørn smiling as he pulled a salmon out of a bag and Asfrid feeding seagulls along the shore. I could see Stian sitting across from me in a late night cafe and Steffi laughing as her little dog Ruby licked my nose in Hamburg. I heard Sarah listing off all the dishes I had to try before she’d let me leave Italy and caught Francesco getting that dreamy look he gets talking about vineyards and wine. I saw Doris standing next to me as we fried plantains for Christmas, Fritz breaking out a beer to celebrate on top of Gotthard Pass, and Felix handing me the keys to his apartment so I could use it while he was away. Nikki was there in the radio studio broadcasting across Italy and David waved as he ran me down on the street a week later. I saw Gos cooking Thanksgiving breakfast in his van and the gang laughing on our last night together in Santiago.

There were quiet, kind moments in their smiles, moments that I never wrote about and laughter from jokes told months ago. It was all there, all around that table, a thousand memories distilled into one last night, like the end of the journey was there in those moments, not waiting for me on some rock ten kilometers away where the land gives out to the sea.

I forgot about the sunset and watching stars. I forgot about rising early and beating crowds to the southern point. I thought only of the trail, of luck and chance, of how plans are nothing against sticking my thumb out as Miriam drove by or passing Fritz on a rainy day in Norway when he’d caught a bit of extra fish. You can’t plan to walk into St. Jean the same day Jorgelina, Christina, Amelie, and Daya arrive from three different continents by airplane, bus, taxi, and train. You can’t hope to run into someone on a kayak trip who happened to have an Italian exchange student over a decade ago. Luck, chance, and trails don’t work that way. They destroy plans in the most beautiful way, with a ride, with a hello, with a driveway and a sign.

The last ten kilometers go fast after ten thousand. I barely take a single breath before the end appears on the horizon, waiting under a distant lighthouse. I feel a bit of joy, a bit of sadness, a bit of nothing.

My mind races. I should feel more, it says. These steps are the end. My heart should sing or break. It should burst with joy or sadness. Tears should run down my cheeks. Laughter should spring from my lips. Something. I should feel something more.

I just am and that is fine too.

The last steps are just steps like all the rest, not any more important than a few hundred yards in Germany or Denmark, no better than walking down an Italian road or sinking through Swedish bogs.

I walk the long roadway stretching out toward the southern point. Tourists mill about. Sunbathers lay on towels spread across the sand. Children play in the waves. People hold selfie sticks to snap group photos.

“It’s the southernmost point of Europe,” someone reads off a sign.

There’s a huge map painted there. People point to their hometowns, they say cheese, and snap pictures. Groups pose with selfie sticks or hand cameras to strangers. I stare upward, still in the flow of people, tracing a line on the map with my eyes to the northern tip of Norway.

I want to say goodbye to it all, but I know it’s too late. The trail is gone and only steps remain. Goodbye was last night around that table, said with the fresh cut sage and olive oil, with a German beer handed to me by a French woman living in Spain, with the laughter of three strangers turned friends as the stars twinkled above.

I look at the map, at the line between Norway and Spain, at that thin slice of a continent I made all my own, then I smile and walk the last steps to the end.