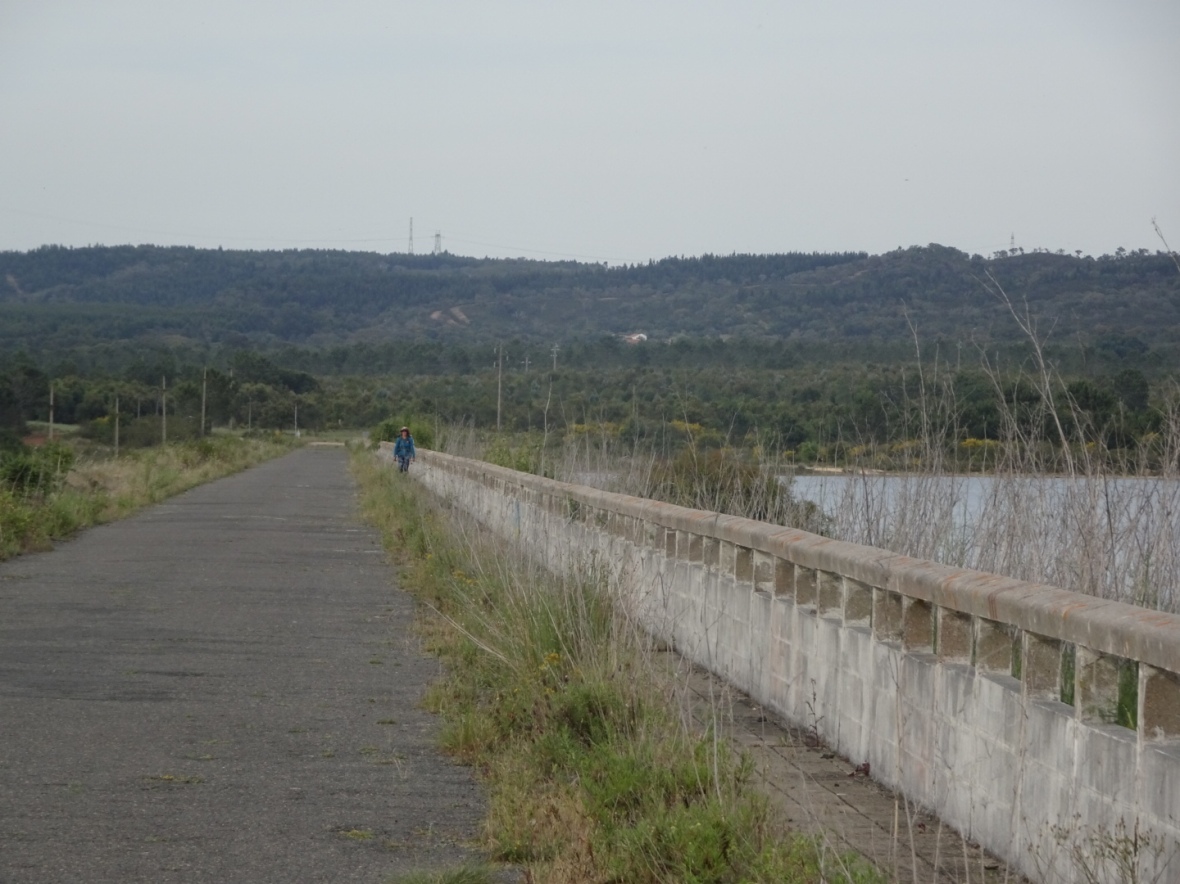 The grey pavement curves into the distance to cut the land in two. Water fills one side. The land drops away on the other. The pavement feels out of place among the maze of dirt tracks crisscrossing the countryside, like it should be part of a bigger road, not just a two mile bend along the top of a reservoir wall. I check my map again and walk on, grateful for a few thoughtless miles.

Don Quixote blares in my headphones. I never listen to it for long so I keep having to replay sections to remember what is happening. He’s past fighting the windmills at least. I think. The miles go quick as he fights a Basque riding a mule and using a pillow for a shield.

The road feels abandoned. Grass rises tall from the cracked edges. Dirt collects in low spots of pavement. Bits of scattered graffiti paint the concrete walls. I walk as Don Quixote loses an ear to the Basque’s sword.

The dam ends and the pavement ends with it. The concrete gives way to gravel. A clear route gives way to more navigation. I flick off my headphones and turn back to see where Daya is.

She’s a few hundred yards back, headphones on, passing near a rusted old RV parked in a field. I stop to wait. The air is hot and still. I hear cars on a distant highway. Then chaos erupts.

The RV door explodes open, a giant black dog flying out of it, a man running after, yelling at the dog to stop. The dog never flinches. Its feet barely touch the ground as it shoots through the tall grass toward Daya.

Everything slows. I begin to run, but I barely seem to move. The dog streaks forward, a blur of black fur as big as a bear and impossibly fast. Its bark echos in the air. Does Daya even see it coming? I hear the man yelling. I feel my feet move under me. Why am I not moving faster? Why is the dog so quick?

The man yells and yells, running after the dog, falling farther behind with each step, like he is in slow motion and the dog is in fast forward. I am so far away. My feet are moving, but I am still so far away. The air feels like Jell-O. I’m not fast enough. I will never get there. I am going to watch this giant dog rip open my friend.

We’ve passed a thousand barking dogs since we met in Saint Jean. They are a constant noise in any town. Snouts growl under fences to flash white teeth. Small yappers run around yards and make lots of noise. Chained guard dogs snarl as they carve circular grooves into the earth as far as their chains let them run. There have even been a few roaming free. But not many. None so big. None so intent. None so fast.

Daya turns and the dog arrives like a bullet from a gun. Fifty feet cut to three in a heartbeat.

The air turns solid and freezes us all place. The dog stops. Daya stops. I stop too, not close enough to help, afraid a single step forward might shatter the fragile balance.

The two of them stare at each other. A hundred pound dog, fur bristling, teeth flashing, and Daya in her rainbow hat with her blue backpack and a silver sleeping pad rolled up on one side.

I hear the owner in the distance. His yells prove time is still moving somewhere even as we stand still. One beat. Two beats. Three beats. Four.

The owner yells again and the dog turns. Five. Another yell. The dog sniffs the air and walks away.

Daya watches it go. I breathe again. Time returns. The air turns back to air. I feel my hands loosen their grip on my hiking sticks where I’d wrapped them like i was holding a makeshift baseball bat even though I was still a hundred yards away. Daya walks toward me. Her hands are still shaking when she arrives.