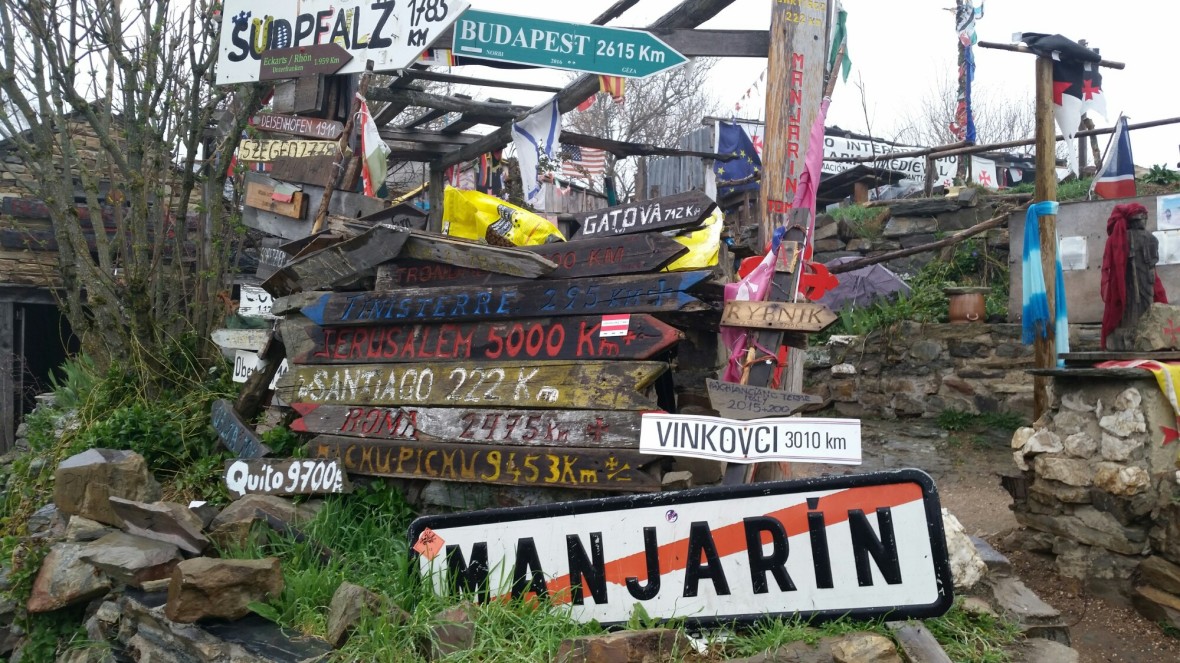 The Templar Knights disappeared centuries ago, hunted down after their power rose too high, but at least one remains, hidden away in the mountains among the ruins of an abandoned town, still carrying out that ancient promise of safe passage for the pilgrims under his watch, the Knight Tomas and this two apprentices.

Year after year, that fire burned and the stones watched. The old abandoned walls rose, a patchwork of roofs stretched out over a patchwork of walls, some metal, some stone, some plastic. Pilgrims came and went. Some arrived fresh and curious, stopping for a moment then disappearing down the road. Others arrived battered by storms, shivering in the cold, or on nearly broken feet. No matter, the door remained open.

The fire is warm today, blazing in the main room, reflecting off the stones. The heat seeps up into the sleeping quarter above, filtering into the mattresses lined across the attic floor. They are not the cleanest, but they are warm and that it more important in places where snow falls.

Against the sea of commercial albergues, restaurants with their Pilgrim menus held out like hooks, baggage services ready to deliver backpacks by van, hotels squeezing shells onto their advertisements, and signs competing for space to tout a hundred different services along a path that sometimes feels more tourist attraction than trail, this odd, scraped together refuge remains its own world, high in the mountains, above it all. No wall, no room, no window, no door, nothing in the complex looks uniform. Each structure appears crafted by hand, by improvisation, by whatever was available at the time. There​ is no running water, no toilets beyond a hole in the ground or the world outside, no electricity if there is no sun. It is an odd perch of humanity, waiting just beyond the Cruz de Hierro, an iron cross placed high on a wooden pole, where pilgrims leave rocks taken from their homeland to signify letting go of the weights they carry inside.

We share dinner at the table, a warm soup, potatoes, and medallions of meat. For dessert there is fruit and pieces of chocolate. The only rule is that no one leaves hungry. The only price is what you can afford, knowing that tomorrow’s dinner is bought with today’s donations left in a box outside. After dinner we sit and talk by the fire until we drift into the attic to sleep. All of us, not just pilgrims, Tomas and his apprentices too, all of us in the same one room, on the same lines of mattresses. Equal.

There are a thousand nicer places to stay along the Camino, places with running water, TVs with a thousand channels, beds softer than clouds, but none feel more real, more honest, like some throwback to another era, another time. The dirt, the ramshackleness, the oddity of it all, it is a giant filter that leaves only the real, distills the world down into revealing the important things. Do you have food? Are you warm? Is there a safe place to sleep?

The wind howls outside. Rain fall in the darkness. Cold air swirls with ice. But I feel safe there in the mountains, my stomach full, a roof over my head, secure among those old stones, under the protection of one last Templar Knight and his companions still watching over the way.