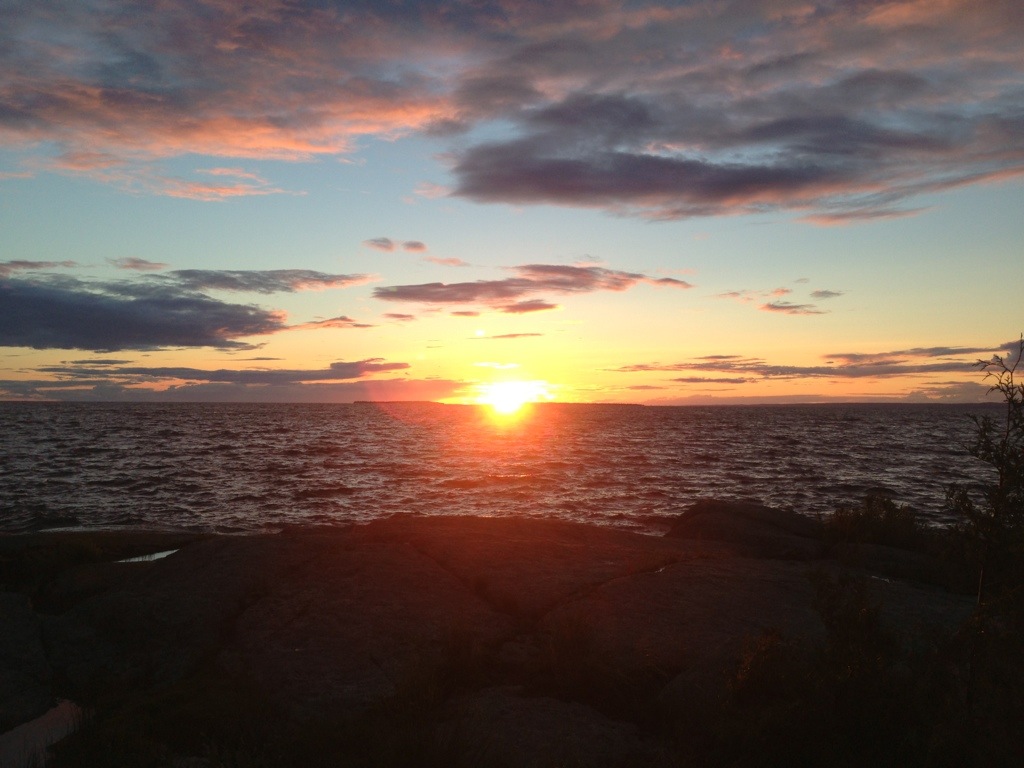 The wind never stopped blowing last night. It hasn’t stopped for three days. It pours out of the west, running the length of Nipissing in a fury, building choppy, steep waves that turn the water white and mad with foam.

I camped on a windswept slab of granite no more than a hundred feet wide, listening to waves crash against the face and the wind rip at the fabric of my tarp, hoping every lull would be the end and always being disappointed.

The morning sun broke through the clouds and I stared out at the same mad water, blue-grey with white tips. I put on my spray jacket and skirt, tightening the sleeves and pulling the elastic around my waist until I felt wrapped in a shield, and slipped into the calm water behind the island’s shadow. I sat for a moment, watching the waves tumble past, feeling the boat move underneath me, then turned into the heart of the wind.

I climbed over rising faces and crashed down through the steep, choppy troughs, water sliding over the deck, the boat fighting to the surface, slipping forward, eating away at the distant shores. The world tilted up and down. It felt like the ocean again, big and powerful, and I thought I’d taste salt on my lips as the wind blew the top off waves and sent spray glittering in the air.

I must have looked insane from the outside, sliding and smashing over the water on a yellow piece of plastic with two pink flamingos strapped to the back, earning every inch of the lake, sinking and digging with each stroke, smiling like a madman, relishing the joy, the swirling energy, the power moving underneath me.

But inside it was all calm, silent, and focused. My hips slid back and forth with the water, the paddle spun my hands, my eyes watched the waves, and I hummed a quiet tune for rhythm.

After seven hours, I slipped into a small bay to catch my breath, to let my mind wander for a moment, to watch something other than a line of waves rising toward me. I popped open my skirt and floated in the calm bay, sponging out a gallon of water that had seeped inside the boat from waves crashing on the deck. I barely noticed a cabin there until a man walked out on the dock.

“Yea,” I said. “I’m just getting a bit of water out of the boat before I head off toward the French. Didn’t mean to bother you.”

He waved me to the dock and looked me over.

“Where you coming from?” he asked.

“You’re not going to believe this,” I said.

And that’s how I met the Atkin Bay Ten.