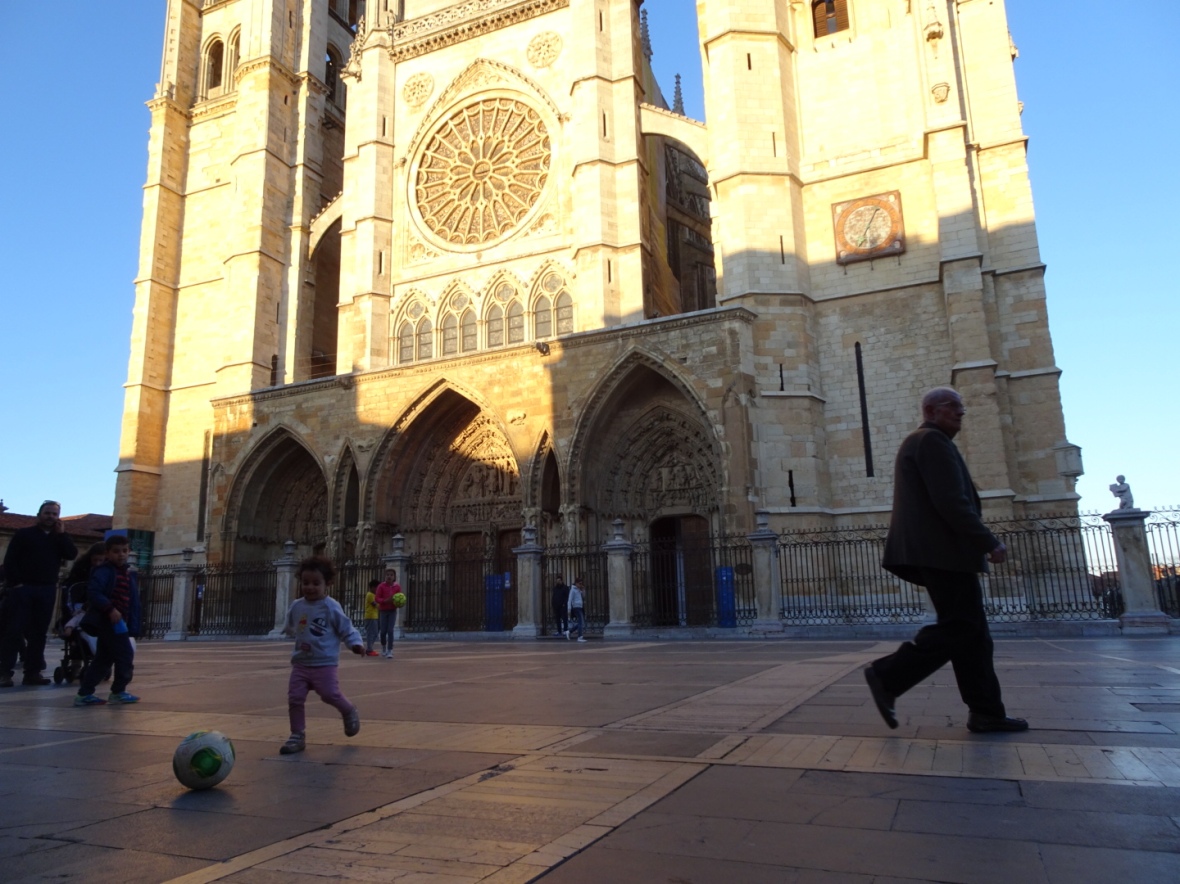 A little girl stands in the giant plaza, pink pants, brown curls, a Winnie the Pooh shirt. León’s huge cathedral rises behind her, a massive building built over centuries with rock, stone, mortar, and glass. She doesn’t notice. She runs forward and kicks a half deflated soccer ball. It shoots across the plaza, bouncing between people walking, scooting past a tourist taking pictures, and rolls to a stop near a passing priest.

His collar is almost hidden under a black coat, but I catch the white flashing as he stretches a leg out to kick the ball back to the girl in pink. She misses it, smiling as it bounces past her towards me, one panel flapping as it rolls.

I catch it with my foot. And kick it back to her. She laughs and kicks it again, sending it toward the priest who has fully stopped on his walk, deciding a few moments kicking a ball is more important than wherever he was going.

The low sun glows against the cathedral’s facade, lighting it golden white. The square is a sea of people. Two teens preen their hair for selfies. They purse lips, angle phones, and toss their heads back and forth to get the camera angle right. The sun creeps up the cathedral face as it drops toward the horizon. Building shadows rise on the stone.

A stout little dog runs past. Kids swarm it. A nun passes without a word. Another kid walks past smiling at the world. A third kid is confused by my beard and asks me why I have such a beard. I tell him for the cold. He looks at me but doesn’t quite buy it.

A couple strolls past, arm in arm, hands sliding close to places the priest would disapprove of. A group of friends laugh as they walk a big brown dog that pulls one of them back and forth. Pigeons move, working the plaza like a gang of theives, flocking just out of reach of any child, dancing between feet, picking up any lost crumbs. An old couple, both leaning on their canes, walk slowly like they have passed this way for fifty years. A runner slips past them, iPod thumping in his headphones, neon shirt glowing.

Two tourists take pictures. The husband looks indifferent as the wife captures the moment, like he’d rather be at dinner and she wants to send a picture back to the kids. A grandfather leads his two grandchildren past, a soccer ball passing them. A pilgrim walks by without his backpack, staring at the cathedral that his feet brought him to. Old friends reunite on a bench, their laughter echoing off walls. A woman walks home after work, eyes forward, flowing straight through the crowd. A girl texts as she strolls, too focused to see the cathedral or perhaps she has passed it a thousand times and it has faded into the unnoticed common.

The last rays of light turn the white stone red. An old man in a blue jacket sits and tossed pieces of corn one at a time to the pigeons. He scolds them when they fight and tosses another piece. A child tells her mom about her day at school as they stroll home, her little hand holding onto her mom’s. An abuela with skinny ankles walks past, a black and white shaw pulled over her shoulders. A girl in pink roller skates with rainbow laces rolls by doing laps in the square. One, two, three then she is gone. A man wheels his bike along, grinning, balanced on the back tire.

The light fades and disappears. Two beats of the cathedral bell mark the half hour. A couple pushes a grey carriage together. The father leans over to check on their baby every few steps. The mom joins him. They never look at the cathedral, their focus is only down. Three generations of women walk side by side, one cane, one leaning on another, one walking on her own. Three teens lean on a fence, talking, working phones for the night’s plans. Five girls head to a club they might be too young for but will probably get into anyway. Parents push a stroller as their little girl pushes her own with a stuffed animal buckled inside.

I stand up. The square is emptying out. The priest left long ago. The little girl in pink pants went with her mom a few minutes later. The half deflated soccer ball went with them. I stretch my legs and wander across the square, imagining all the threads that cross it in a day, in a week, in a year, and adding my own.

A bearded man walks past, happy, on his way from the northern tip of Norway to the southern tip of Spain.