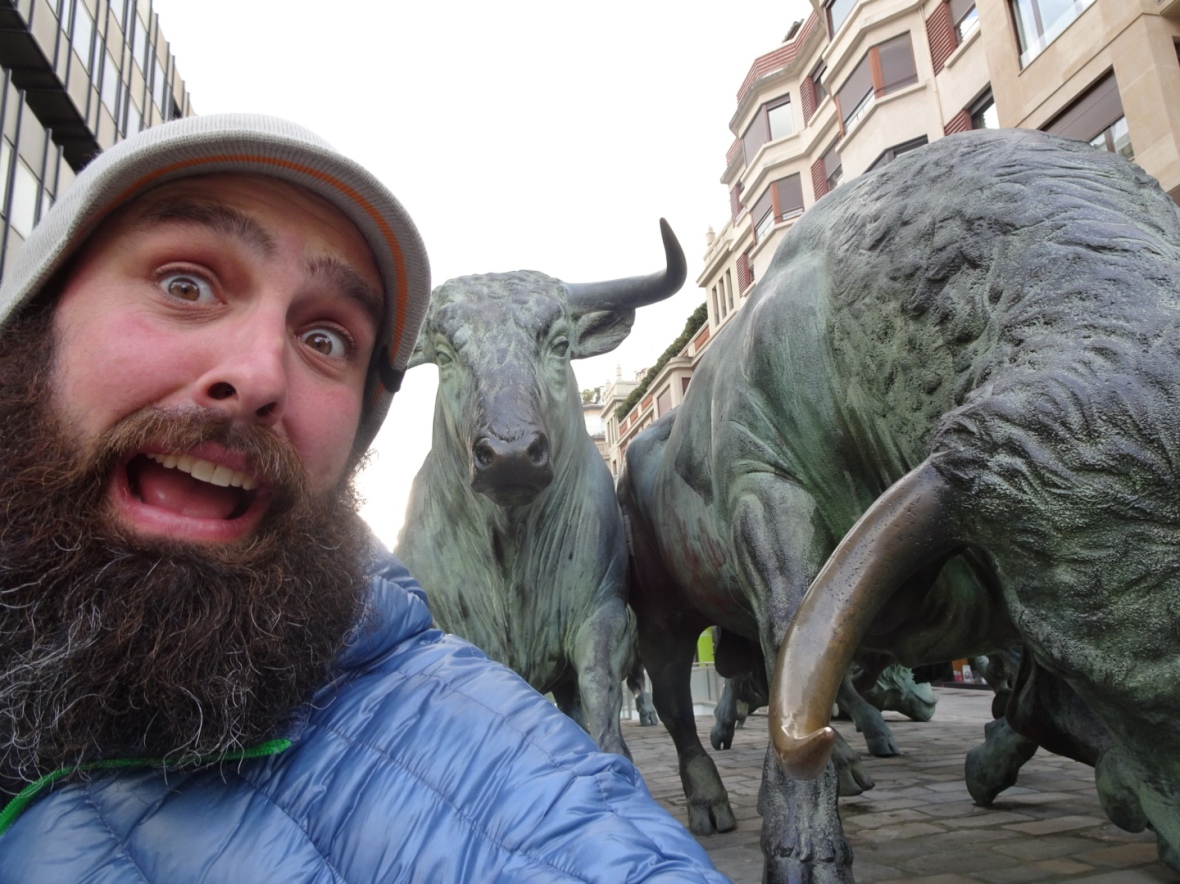 Fists hit palms three times then fingers shoot out. Jorgelina holds up two. I hold up one. Three total. Odd. We turn left down a narrow street.

One of the buildings leans out a bit, bent by age and gravity. We slide past, laughing until we reach another intersection and count again.

Two and one is three again. Left again. We pass a pastry shop and I drift over to the window then drag Jorgelina inside after me. We buy a bag of tiny chocolate donuts and return to the street, heading toward the next intersection as we eat. Three more blocks and we stop at a second pastry shop, this time for cookies.

Pamplona’s giant walls ring a maze of streets that crisscross the inner city. We found the bull ring, circled the citadel, and passed churches and squares with our map, but as we ran out of points to aim for we folded it away and let chance guide our steps. We wandered back and forth on chance alone, stumbling past pastry shops and crowded bars, turning corners down busy streets and quiet passages, losing ourselves in the maze. Squares become discoveries, beautiful buildings found treasures.

A crowd is gathering in a square a block away, maybe a hundred people. We drift into it. Children run around us in costumes of hats and masks. Some have play swords and clash like knights in tales. One dressed as Chewbacca has a light saber and is swinging it wildly at a group of three kids running around him. Above it all, a life-sized stuffed woman is tied to the monument in the square.

“They are doing to burn her,” Jorgelina guesses.

I nod. A man climbs up the monument and cuts the stuffed woman down. Suddenly we are moving, the woman on a platform carried to the front. Musicians follow behind, mixed with the crowd, accordions blaring, tambourines thumping.

Down the streets we go, a small wave of people, one or two hundred, the stuffed woman at our front, music all around us. We turn through the maze of streets, on and on until we find a courtyard with a circle in the dirt. Everyone crowds around. Kids push through to the front. Jorgelina and I hang back staring, not sure what is going to happen. People juggle lit torches in the circle. The crowd grows thicker. Someone brings the stuffed woman into the middle. We can barely see through the crowd, but the sudden burst of light and flames tells all. She is burning. The crowd cheers.

Jorgelina and I look at each other, not sure what to think. Either of us could have asked, but neither did. As if by silent agreement, neither wanted to break the magic of our imagination, the spell of randomness, the gift of not quite knowing that allows imagination to flourish. Half lost in the old city of Pamplona, on the streets where the bulls run in the summer, with the smouldering effigy still glowing, we grin at each other and disappear back into the maze of streets, our map still folded away in a pocket.