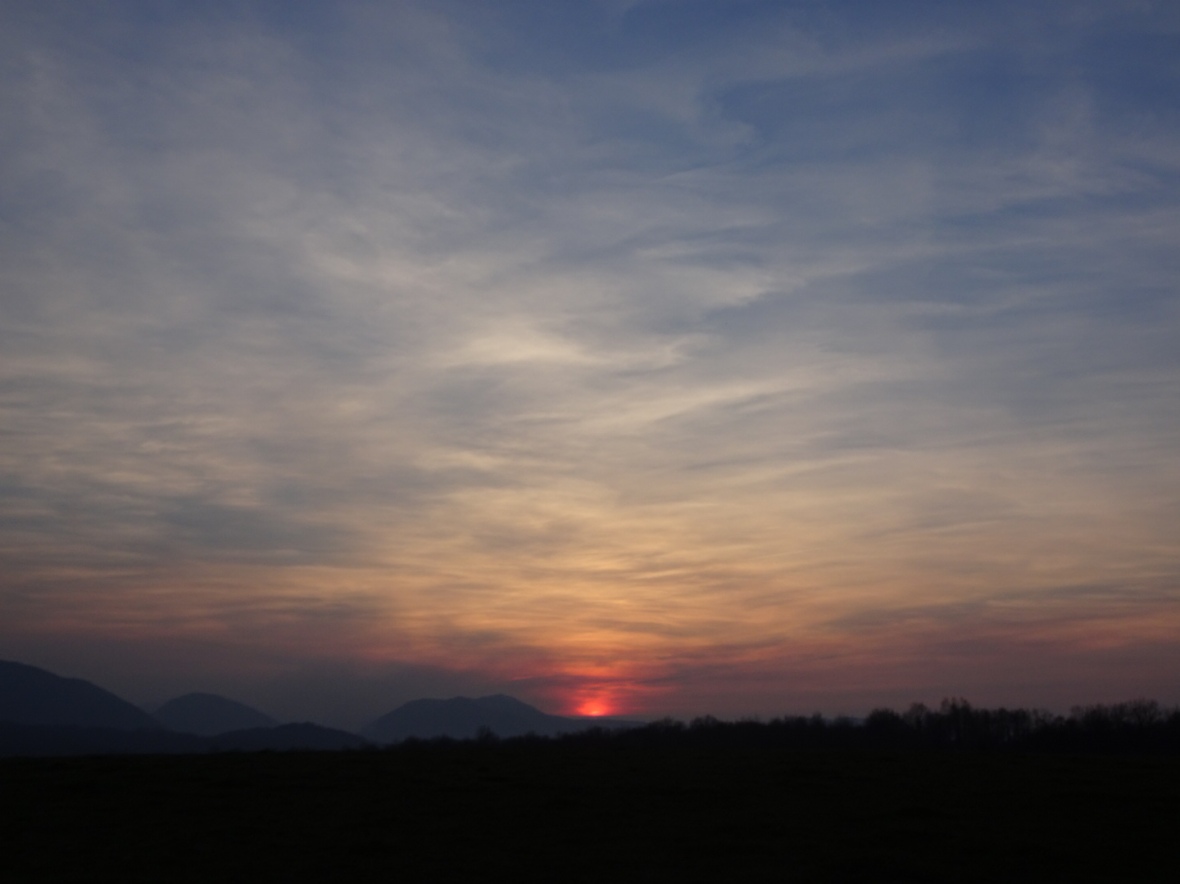 I rise with the sun. I walk between villages. I find some place to sleep as darkness falls. The pattern repeats itself over and over. The days start to slide into each other. The yesterdays and day before yesterdays blur. When was that particular village? When did I find that water fountain near the church? That curve of street? That leaning barn?

It scares me. It feels like the days that slide together into indistinct weeks and months back in the world off the trail. Maybe I’ve been walking too long. Maybe it is too easy. Maybe it has become just another routine.

Sometimes I go to sleep and barely remember what I did during the day. I lay there thinking where did I wake up? What did I do in the morning? Did I pass a village? What did I eat? The hours slip by and only moments remain.

The sun shone warm enough for me to wear my straw hat for the first time in forever. The mountains, the real ones with snow, remain just a backdrop, there, but not there. I found a new bread in a bakery. I passed two kids rocking out with a cell phone speaker on an old stone bridge built before electricity. I slept on a flat bit of forest between villages where the slope of the mountain flattened on a bend.

I ate my last bit of bread for breakfast. The first village I passed had a store, but it wouldn’t open for an hour so I kept going. I didn’t find food for another 22 miles. I was amused more than upset. I am not starving. I did buy a liter of ice cream and ate it while walking into sunset. It got dark before I found anywhere to camp so I walked in the night past a huge cathedral built on a hill. The walls are all lit up at night and it glows in the darkness. I slipped past and away into the forest where I found a flat bit of ground and slept out under the stars.

I passed a man repairing an old house. The fresh wood looked bright against the grey, weathered planks. In one village there was a woman leading three kids down the street. The last kid had a long stick and swung it like a sword. Near sunset I passed an old man shoveling hay in a barn. He looked like a moving picture, visible through the open wood door, him and five cows. I slept somewhere, but I can’t remember it. I think it might have been on top of a hill in the trees with a view of the Pyrenees, but maybe that was another night. I only remember walking as it got dark past a few pastures that had been burned.

I found a bakery open on a Sunday, which is good because Sundays are hard for finding food in small towns. I actually don’t like weekends at all. They make me worry about someone stumbling over my tent in the mornings ot at night. I sat in the town square because a closed bar had wifi and I wanted to download a book to listen to. It took too long and I ended up walking up a mountain in the dark. But I don’t mind so much. I enjoy the night. I like watching the stars come out and cities light up. I like feeling like the only person alive on entire mountains as the masses abandon them to me and my headlamp. It is cold, but it is an easy climb. Most climbs are easy now when I’m not bored. I find some flat bit of ridge big enough for my tent and sleep.

I walk around the cathedral feeling awkward around so many clean people with my backpack and dirty clothes. I fill my two water bottles, one that I picked up in a bakery a few weeks ago and the other a wide-mouthed Gatorade bottle I’ve had from the start. That bottle has seen some things. Now it can add magic water to the list. I head off, walking in the dark because I can’t find a quiet place to camp. I finally settle for a dumpy patch of woods and a bit of ground that no one would call flat, but at least I found a spot without thorns.

I meet a couple on their bikes. They are excited that I’m going to Santiago. They offer me a cup of tea they have in their day pack. I ask if they have seen anyone else walking the trail.

Late in the day, I pass a herd of sheep walking down a town street. I take pictures. A man in a truck is waiting for them to pass and much less amused than I am. I end up camping on an admirably flat hilltop, hidden in the forest.

I walk through a big town early and buy a box of ice cream bars to eat on my way out. None are lost to melting.

Then it is village after village. Some are a bit bigger or smaller. Each has a church near the center. All have dogs that bark at me.

Late in the day a farmer sees me walking by and points to his watch and the sun. He knows I won’t make it to the next town in the light. No worries, I say. I know I won’t make it either. An hour later, my phone decides to reset itself in my pocket. It deletes everything and locks itself, demanding wifi and my Samsung password to unlock. I have a Samsung password? Without a GPS, I start to pay very close attention to the trail markers. Red and white lines mean yes. A red and white X means no. A turn has a third white line that turns to point the right direction. I don’t get lost.

I camp on an abandoned road bed between two fallen trees. I spend an hour typing messages via my satellite emergency beacon to my dad asking him to reset my Samsung password since I have no idea what it is and never thought to use it again and now it is standing between me and any hope of using my phone again. I find it funny that I am sending messages to bounce off satellites back to Florida just for a stupid password. I don’t even know if the reset will work. I don’t sleep well. A cow is wandering around somewhere nearby with a bell all night. Maybe it is a sheep. It doesn’t matter, I’m worried about the phone.

The new password comes back to my beacon from Florida via satellite. I wander around Mauleon looking for WiFi since the phone demands it even though it has a perfectly good signal. I find it outside a bar. The new password works. The phone is back. All my data and information is gone.

It takes me six hours of downloading and adjusting and figuring out things to get the phone working right again. The tourist office is kind enough to give me the space, electricity, and WiFi to do it. Then outside, a nice lady asks if I am on the pilgrimage trail to Santiago and tells me there is alburgue for pilgrims in town. I thank her, but I walk out anyway. I’ll reach the main starting point tomorrow or the next day. I want another night of camping before jumping in that highway. I find a not so flat spot in a patch of woods and go to sleep. It’s not a good spot. I slide down inch by inch as the hours pass and gravity reminds me the ground isn’t flat. But it is wild and even as the rain comes, I appreciate that I’m there, embracing the last bit of this insane journey before joining the well organized highway marching toward Santiago.