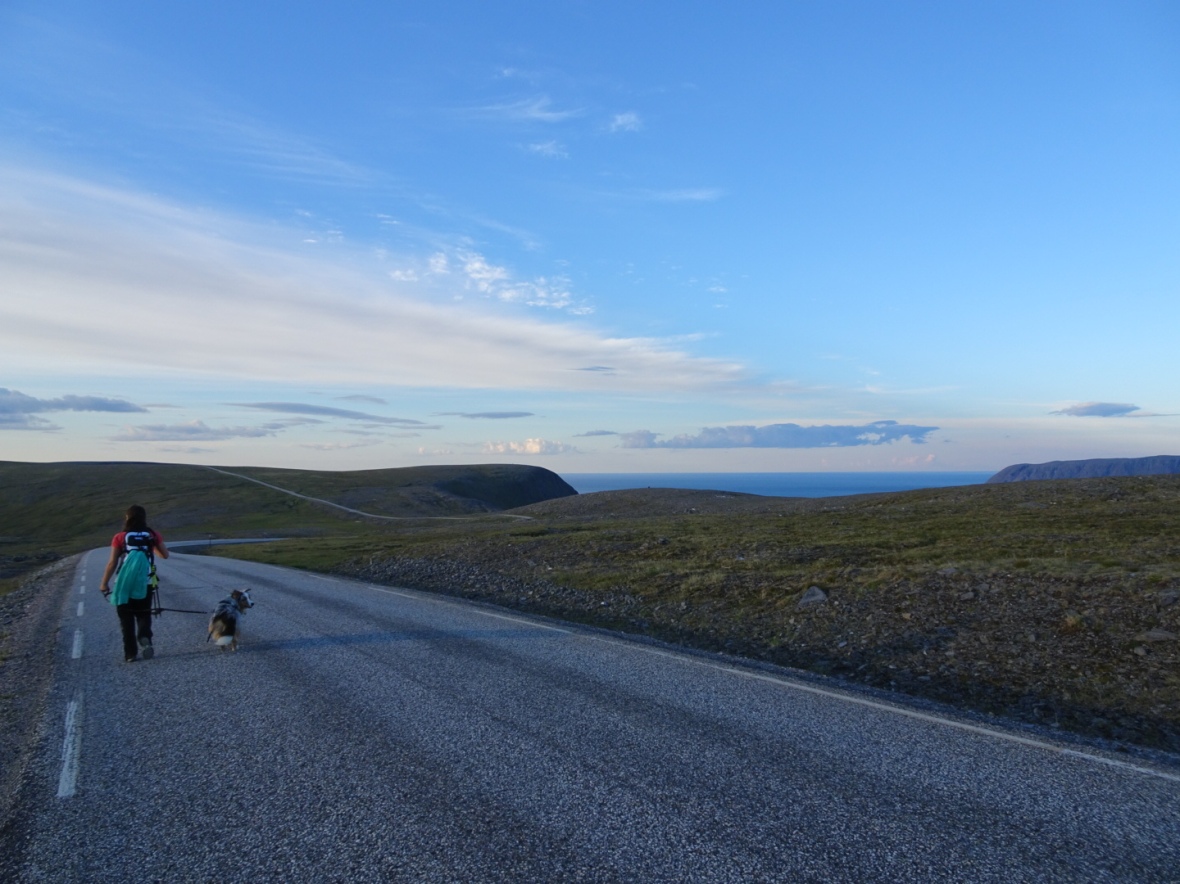 The green van rolled to a stop, the woman driving smiled at me with her rainbow tinted glasses as she leaned over to open the door and clear some space.

“Are you heading to Nordkapp?” I asked.

She nodded and waved me in. Flowers and the word “Mimi” hung from the rearview mirror. A tangle of driftwood rested on the dash. An Australian shepherd licked my face as I climbed in.

“Do you mind dogs?” she asked.

The engine fired up, the van rolled onto the pavement, and we were off to Nordkapp.
Fifteen hours later, we topped a final hill on foot. Miriam’s green van came into view, “Mimi” hanging from the mirror, and it was time to say goodbye.

We’d left the van in a parking lot and walked to Knivskjelodden together. We’d crawled out on slippery beds of seaweed to touch the Arctic. We’d cut across the tundra and bogs toward Nordkapp’s high perch on the cliffs. We’d huddled past midnight waiting for the busses to leave and clear the people away from the statute for the perfect picture. We’d walked the long road back to her car, passing reindeer herds and dodging the last cars leaving for the night.
In the parking lot, we gave each other a big hug.

For a day, I wasn’t alone. I had a fellow adventurer, a co-conspirator, a partner in crime to let me know that things are as beautiful as they appear, to share the joy of being there with the midnight sun, the Arctic, and the ends of the earth.

Sometimes you almost forget where you are, it doesn’t feel real until it’s reflected off another person’s face.

But paths only cross for so long. Ours was a single day at the top of Europe.

Miriam nodded and we gave each other one last hug before I walked away.
Asfrid once told me the secret to happiness was “to give.”

As I walked, I thought of Oddbjørn out on an island picking cloudberries, of Asfrid turning them into jam and handing me a jar as I left Lakselv, of how I cradled them in my pack for days waiting for the perfect moment, some low time when I would use then to pick me up or a joyful celebration, how I never thought that moment would be as simple as handing them over to a new friend who had never tasted them before.

“The secret to happiness is to give,” Asfrid’s voice echoed in my head.

I walked away imagining Miriam parked on some beach, cracking open the jar, spooning the golden berries onto a crust of bread, remembering the perfect day we had at the end of Europe. I smiled and thought that maybe Asfrid was right.