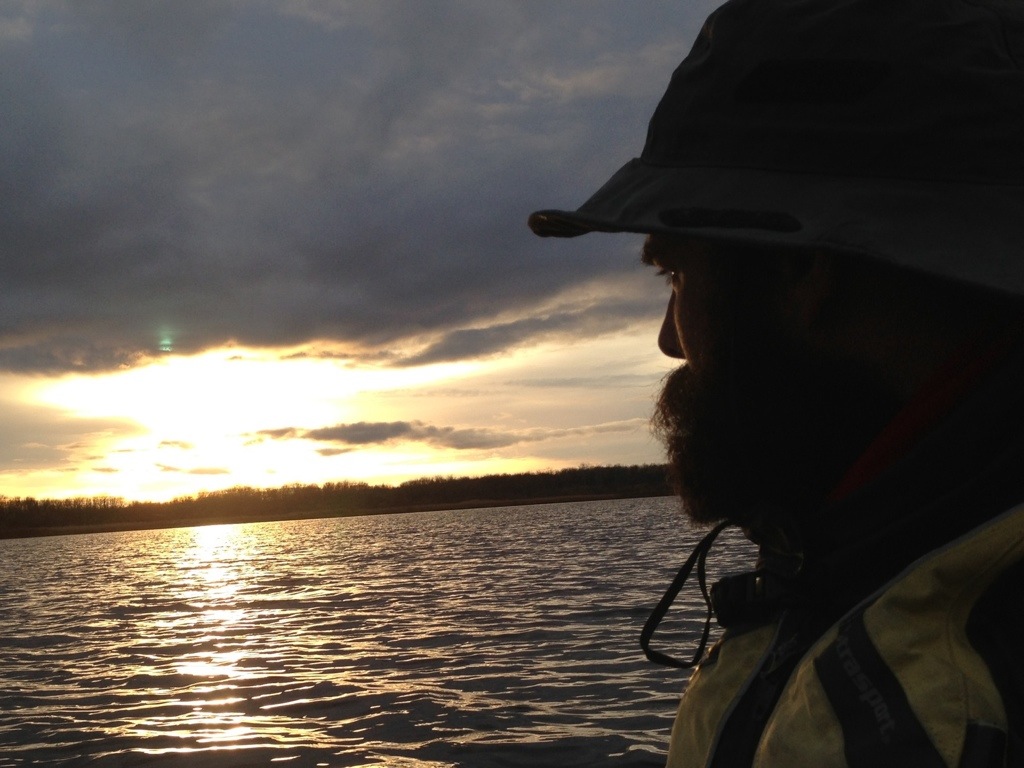 An aluminum boat idles past. Three fishermen hunch inside, their jackets pulled tight, heads low, eyes staring under brims. The man in the back looks at me as they pass and shakes his head.

“Hey,” he says. “You know it’s rough outside this bay ahead.”

The wind had shifted to the southwest, twisting around to spill waves into the gaps between islands. I’d already leaped across two, crashing over stretches of big water, slipping behind islands for cover, catching my breath, crashing again.

“This is serious water,” he says.

His eyes run along the kayak from bow to stern. He shakes his head and looks at me like he thinks I will die. I smile back at him, my mouth hidden under a fleece mask. He sees nothing but crows feet and my gleaming eyes.

Where does he think I came from? Where does he want me to go? Is he hoping for company in his retreat from the island’s edge?

His shoulders shrug and he grumbles something to his friends as the engine fires to life. The aluminum hull lifts up in the water and motors away. He’s done his job. If I die, it won’t be on him.

I slide toward the gap of water and stare from the edge, my eyes calm, my chest rising and falling, my breath hot underneath my mask. The lake opens like a window to the southern horizon, waves rush in, wild with white-capped teeth.

Somewhere I know the trip will end tomorrow. In my heart, in my head, somewhere I know. But not in the waves, not watching water crash and roar against granite, not rising and falling in the mad sea. The wind, the cold, the white-tipped water, they leave no space for anything but the moment.

I squeeze the paddle in my hands, feel the plastic hull wrapped tight around my hips. Friends, both dearest friends. The motorboat’s whining engine disappears. The horizon clears my head. Rushing water holds my eyes still.

I thought the last days would be beautiful once. I thought I’d camp at night, stare into fires, and sleep on slabs of granite. I thought I’d count shooting stars, drift across bays, and write down a thousand thoughts. The secret to life, to happiness, to everything. Feelings, inspiration, dreams spilled across pages of ink. I though it would be perfect.

The lake is a monster eating me alive. I don’t have time for the end. There is no poetry here. I’m too busy trying not to die.

But it is perfect.

The man in the boat is wrong. I am here to live. Bring on the waves, bring them high and wild.