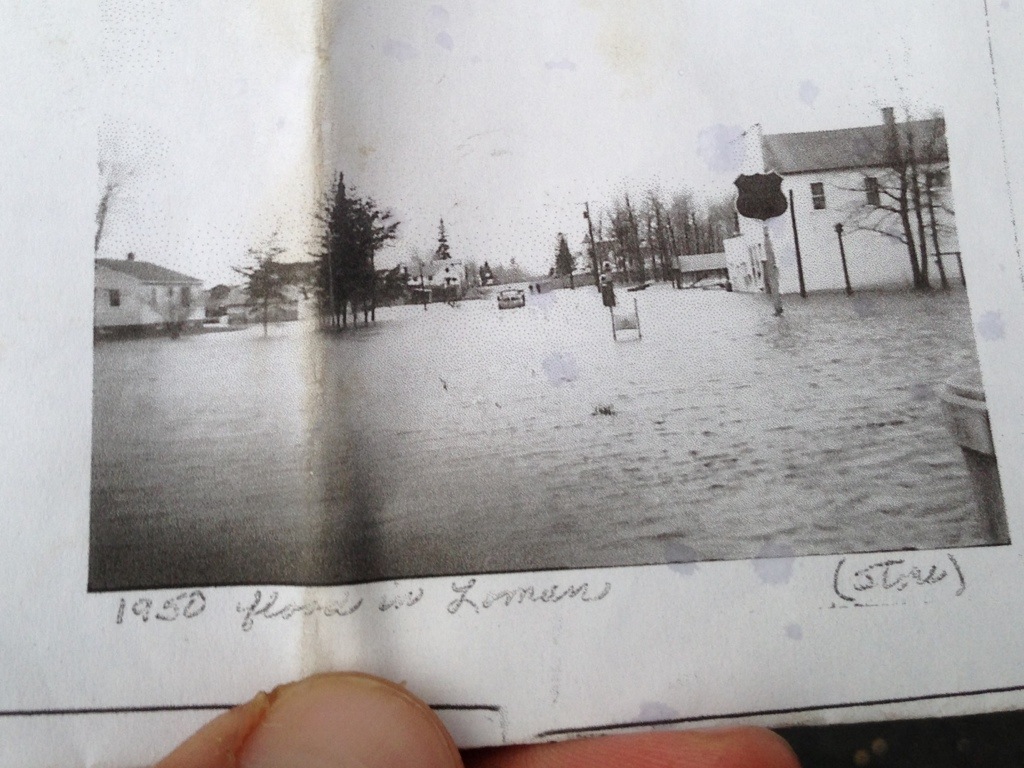 I remember Punky’s black truck. It pulled up next to me at the boat dock in Loman over a year ago as I packed to leave. The window rolled down and Punky looked me over.

“Where you going?” he asked.

We stood talking for an hour. He told me about the general store his dad used to own. It stood right where I’d camped. I told him I wished it were still there so I could buy a chocolate bar, but Punky had torn it down in 1965 and the land became a park. The well is still there though, pumping cold water out day and night. Punky and I shook hands on the boat ramp, he wished me luck, and I splashed into the Black River and paddled away.

I half expected to see his black truck waiting for me when I returned. His nephew had called him to tell him I might stop by. Loman’s a small town and Punky seemed as much of a fixture as the old well, always there, reliable 24/7. I pulled the boat out of the water and under the same pavilion I’d slept in over a year ago.

A car rolled into the parking lot and stopped a few feet away. It was almost dark and I stared in the gloom. I smiled, trying to recognize Punky’s face, figuring he’d traded in his truck for something with better mileage, but unless he’d grown long, auburn hair and regained the youth of his 20s, it wasn’t him. The window rolled down and a woman’s voice called out.

“Hey, where are you going?” she asked.

“The Northwest Angle,” I said.

“Where you coming from?” she asked.

“You’re not going to believe this,” I told her.

We talked for an hour. Shana told me stories about wolves and horses, showed me pictures of a big mare named Boom Boom who’d saved her life. I told her about waves and beaches and how I’d met Punky at this park over a year ago.

“I wish I could take you riding,” she said.

Her eyes lit up like mine do when I talk about Lake Superior’s cliffs or walking across the Sierras.

She thought for a moment.

“You ever had real maple syrup?” she asked.

“Sure,” I said. “We always bought the good stuff in the store.”

She shook her head and laughed.

“I’d love that,” I said. “I can save a bit of it and take it back home to share. I have a friend from China and I was looking for something to bring her back from the North.”

She came back in the morning and told me about tapping maple trees in the spring for sap and how the weather had to be just right, freezing at night and warmer in the day. She handed me two amber-filled mason jars and third with homemade apple jam. I held them in my hands like gold. She smiled at me.

“Remember,” she said. “They won’t last long once you taste it.”

A black truck pulled out of my memory and into the parking lot. I waved. I knew it was Punky before he opened the door. He smiled at me and handed me a box of homemade chocolate-chip cookies. I laughed and stacked them on top of the syrup and jam.

“If I stay here much longer, I’m not going to have any room left,” I said.

The three of us stood there talking. Punky told us stories about Loman and showed us pictures of the old store. He keeps them folded up in his truck in case anyone wants to know what the place looked like back in 1950.

“So why’d they call you Punky, anyway,” I asked.

“My mom always called me pumpkin,” he said. “But my little sister couldn’t say it right. All she could say was Punky and it stuck.”

I laughed. It is good nickname.

“So where are you going now?” he asked.

He shook his head.

“Well, I knew you’d be back,” he said. “There’s an old legend that says if you dip your toes in the Black River you are bound to return someday.”

“Well, you should have warned me about that last year,” I said.

It was the middle summer then. The river was high and I was sure I’d splashed into it without much thought. Now the highs are in the 40s and I tiptoe to stay dry.

We stood talking for a bit longer until Shana peeled away to go to work and Punky left to check on some repairs for the church. I waited there a bit longer, hoping the sun would chase off the chilled air as I ate chocolate chip cookies for breakfast and packed the boat. I slid the jars of syrup into the hold like the most wonderful treasure, remembering Shana’s warning about tasting them, wondering what it would be like to tap trees in the early spring.

I dragged the boat down to the Black River. There wasn’t much water left, just enough to reach the little park with the well where the store used to be. I thought of that day I met Punky, of maple syrup and riding horses through the woods, of how strangers become friends.

Cold rain began to fall. I shivered and slipped the boat out into the water, careful to splash one foot as I slid aboard.