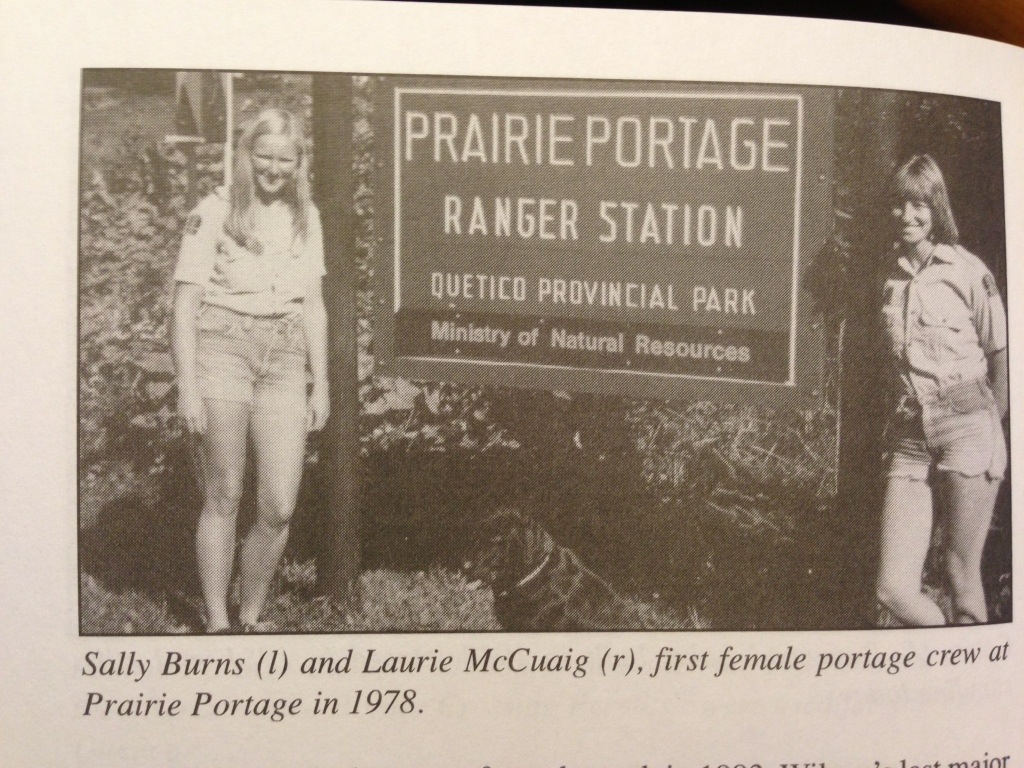 Sally ran her fingers over the map of Quetico, following the route from French Lake, through Pickerel and Doré, past Twin Lakes and Deux Rivieres, into Sturgeon and down the Maligne River to Lac la Croix.

Her hands inched across the page, running over the lines, tracing the curves of blue and green ink. Memories. Moments of her life. Her kids swimming on a sandy beach. A stand of white pines. An old fiberglass canoe. The perfect campsite on a low rock. Portaging with a yoke set too wide for her shoulders. The day the float plane landed by an old dock to tell her that her father had had a stroke.

No woman had ever worked on the portage crew in Quetico until Sally and her friend Laurie applied for the 1977 season.

“They worried about one of us girls having to share a tent with a guy,” she said, “so we applied together and told them they could just hire both of us.”

Her finger moved down to a long string of portages coming out of Poohbah Lake. 979 meters. 1,670 meters. 1,240 meters. Puddles of water between them.

A lot of the old portage crew didn’t believe Sally and Laurie could do the job. They believed it was men’s work. They believed that sawing away deadfalls, clearing trail, and portaging canoes and gear through the backcountry would be too much for two women.

“So early on, they sent us over those three portages,” she said. “They wanted to test us. They called it The Death March.”

Sally and Laurie began hauling their gear down the trail until the path disappeared in the ash of a recent fire. Sally’s black lab put his nose down the two women followed, a canoe over their heads, heavy packs strapped to their backs. Sweat poured off them as they walked, running down their faces, beading and dropping into the dust. Their muscles ached. The weight of the 70-pound boat and steel saws crushed their shoulders. But they refused to back down.

Sally’s finger tapped against the map. Her voice brightened. Her fingers trailed over colored lines on the paper. Smooth granite. Rising white pines. The trail dropping toward the bluest water.

“We made it to the end,” Sally said, eyes alive.

Two of the men that worked on portage crew were waiting at the end of the portage and exploded into applause when Sally and Laurie arrived.

“Right there,” Sally said, pointing at the map.

I saw the canoe fall from tired shoulders. I heard cheers echo into the wild. I saw Sally’s tired, happy smile at Laurie.

Sally’s finger tapped against the paper and slid away. Her eyes lingered for a moment, then she folded the map and handed it to me.

“Quetico is a beautiful place,” she said.