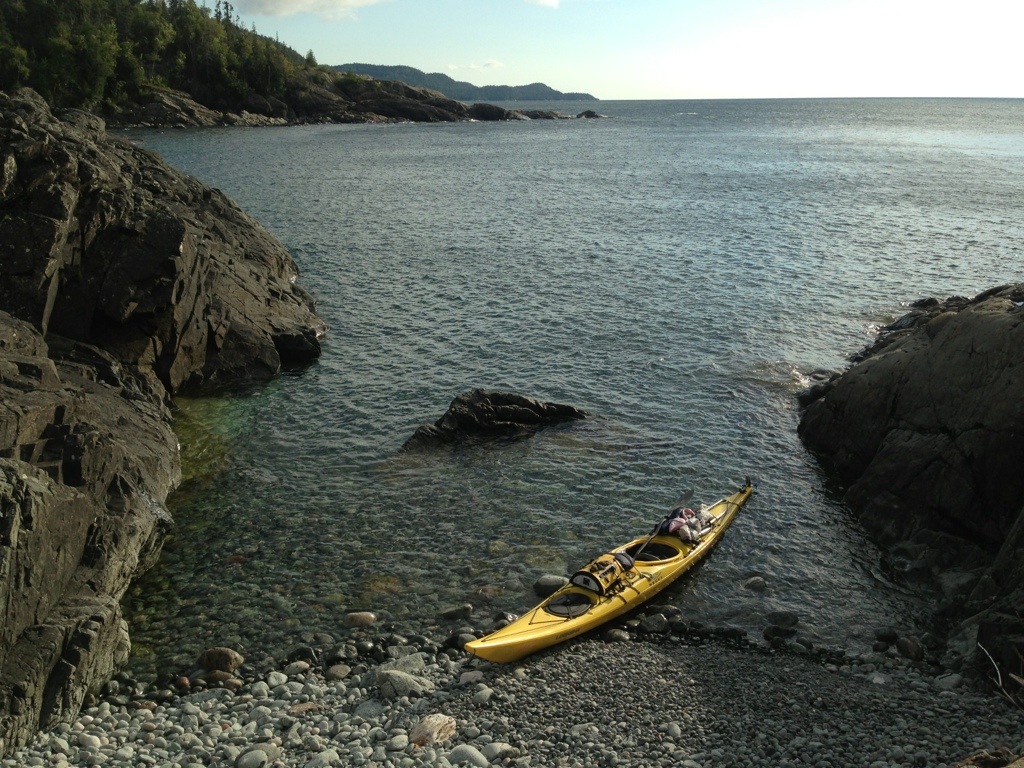 I was in the midst of the Grand Portage when I first saw Superior. I’d abandoned the kayak halfway down the trail and was walking with all my equipment piled on my back to reach the shore to camp before dark.

The weight of gear crushed me down, bending me under it and I moved slow, like a tired old man. Sweat poured off my face. My back ached. My feet blistered, broke, and bled. The trail felt endless, like a treadmill through the forest. It just kept going and going, dropping in a long, slow fall that made you wonder if Lake Superior was only a myth.

Then the trees broke and I saw the most beautiful blue water I have ever seen. I stopped and stared out in awe. It seemed to stretch forever.

When I dragged the boat down in the morning and slid it off the shore, the water looked like a window straight to the bottom. Floating across the surface felt like flying through the air.

I’d planned to race down Minnesota’s coast to Duluth. The lake was only a connection to cross, only a number, only a hundred and forty miles. I thought it might take a week, but everything changed when I saw that water.

Isle Royale was right there, just a smear on the horizon. The Apostles were so close with their caves and sand beaches. If I turned at Key West, I’d see Huron’s Georgian Bay, the Pukaskwa jutting out like a defiant chin of rock, the Slates rising in a meteor’s wake, and the Sleeping Giant guarding Thunder Bay.

The Great Lakes turned one hundred and forty miles into a thousand and I never saw three of them and only pieces of two. I wish I had more time.

But as endless as they look, as giant as they seem, they are not invincible. Millions of people live on the Great Lakes. Chicago, Milwaukee, Green Bay, Cleveland, Toledo, Toronto, Detroit, and Buffalo all sit on Great Lakes water. As the current flows from Superior, to Huron and Michigan, to Lake Erie, over Niagara Falls to Lake Ontario and out the St. Lawrence, the cost of civilization takes its toll.

They say you can dip a cup in the ice cold water of Lake Superior and put it right to your lips. No filter, no drops of iodine, no treatment, nothing but pure water. No one says that about Ontario.

There are a thousand reasons why. Sewage and farm run-off. Heavy industry. Power plants. Shoreline development. Dumped garbage. The mixed environmental policies of two countries, eight states, one province, and dozens of cities hold over a fifth of the world’s surface fresh water in the balance.

I’ve paddled in bad places. Places where you shudder when a wave splashes over you, where the shores are lined with trash, where the water smells rotten and you wouldn’t dare filter a glass to drink. That isn’t the Great Lakes, not the part I’ve seen anyway, not yet.

I hope it never will be.

But hope doesn’t do enough. You have to get involved. We’re all involved already, really, if we know it or not. Maybe you bought a car built out of steel shipped in lake freighters and forged on the shores of Lake Michigan. Maybe you eat corn grown in the watershed or use electricity from plants cooled by Great Lakes water. Maybe you visited Chicago for a Cubs game or watched the Packers in Green Bay. We’re all connected to the lakes somehow and we will all decide, by action or inaction, what happens to them. Don’t fool yourself. Don’t convince yourself that you don’t have a choice. You do. We all do. We are deciding if our grandkids hear legends about drinking water straight out of Superior or thanks us while dipping cups into Lake Ontario.

The Alliance for the Great Lakes is a fantastic organization that can help you learn about the problems facing the Great Lakes and figure out how you can help. Donate money if your can. I did, carving it out of my food budget, eating a bit less ice cream, not ordering a burger every time I went to town, and it felt great paddling through Huron and Superior knowing that I’d done something to help protect all the beautiful places I saw. Call and write politicians. Right now, critical funding to protect the Great Lakes is under pressure in congress, go to the Alliance website and find out who to call. Talk to friends about doing the same. Find beach cleanups in your area or organize one yourself. Every day we are deciding the future of the Great Lakes. Educate yourself about the issues and get involved.