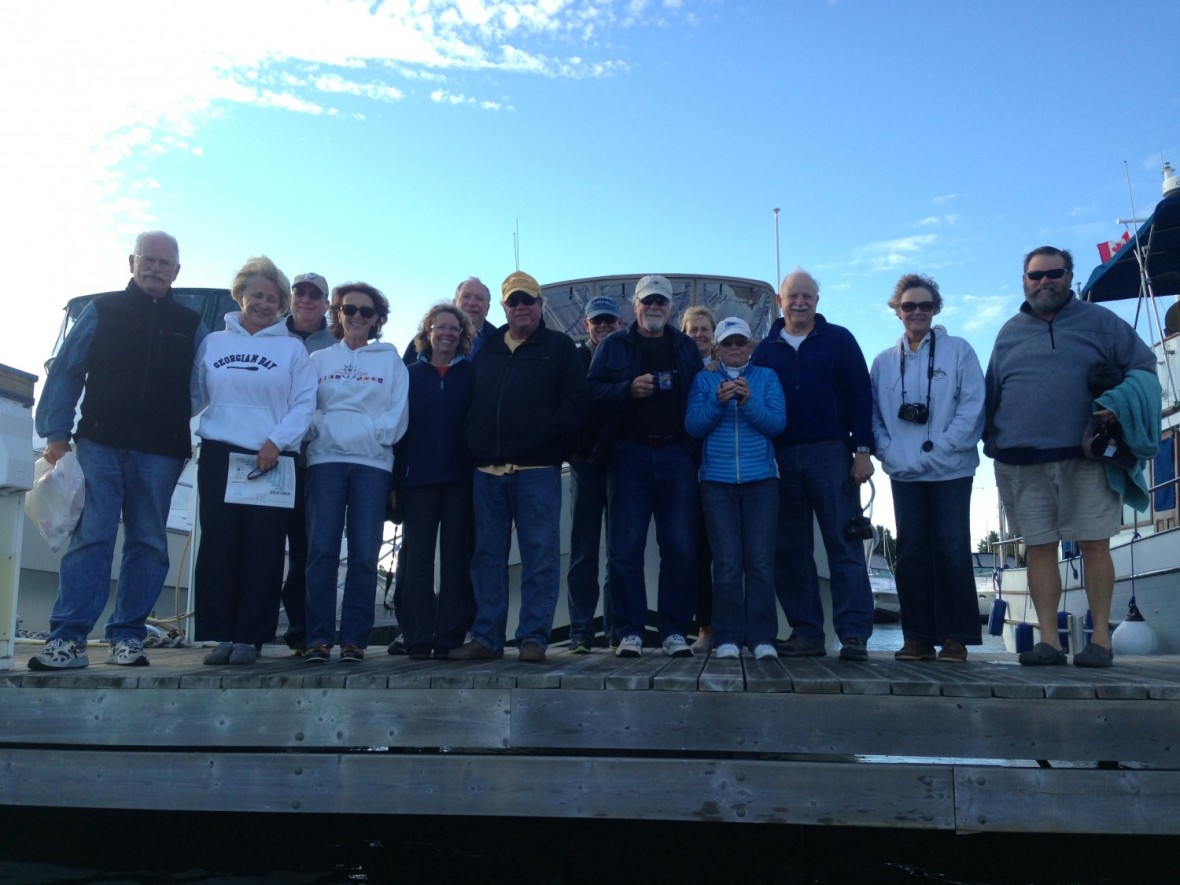 The dock came alive with people by the time I snapped the last hatch cover closed and lowered the kayak back into the water. The early morning air felt crisp and the wind still raced from west to east, but it lost some of its bite under a blue sky.

My friends crowded the dock to see me off and I shook a dozen hands and gave a dozen hugs before I slipped into the boat. I floated there for a moment to take a picture, looking up at all the kind faces who were strangers a few days ago before Tom said hello as I ate ice cream on the dock. Then I turned and paddled away because goodbyes are harder if you linger.

The first boat passed me an hour later. Then another and another. In My Element. Journey. Freya. Blewgrass. On they came in a long string, sometimes distant, sometimes close, always with a silhouette waving from the deck, until they were gone and water felt lonely again.

At nine am, I flicked on channel 71 and listened to Roy’s voice read the North Channel weather and tell me about the news of the world. I thought of all of us sitting up there on the second story of the Anchor Inn in the room lined with flags from boats around the world who have stopped in Little Current. Roy read the names of the crews in the room. Fandango crackled over the static and I smiled, thinking of the day I met them in Killarney and how I saw them again last night in Little Current.

Boats began calling in, from east to west. I heard Off Leash in Little Current and thought about drinking hot chocolate in their cabin after John and I raced to help a sailboat dock in the wind. Then Tom’s voice from Journey called in and mentioned that they have Hank on board, his 90-year-old father-in-law, the oldest looper, who is a veteran of three wars. I thought about sitting on a bench with him and how he told me with glowing eyes that in his life we’d gone from outhouses to the moon. Blewgrass crackled through and I thought of the warm cabin I’d slept in for two nights as I listened to the wind howl in protest. In My Element, Freya, they all called in, their names making me smile, letting me know that my friends were out there, somewhere in the North Channel, and I thought to call in myself, to let them know that I was there, but I didn’t think my handheld radio would reach. Then a voice cracked over the speaker.

“Hey Roy, were calling in to report that Daniel in the yellow kayak left this morning and is headed west from Little Current,” it said.

I laughed and smiled.

“There they were,” I thought, “still looking after me.”

I heard Roy’s smile as he relayed the message, happy to know that everyone in the North Channel family was doing well.