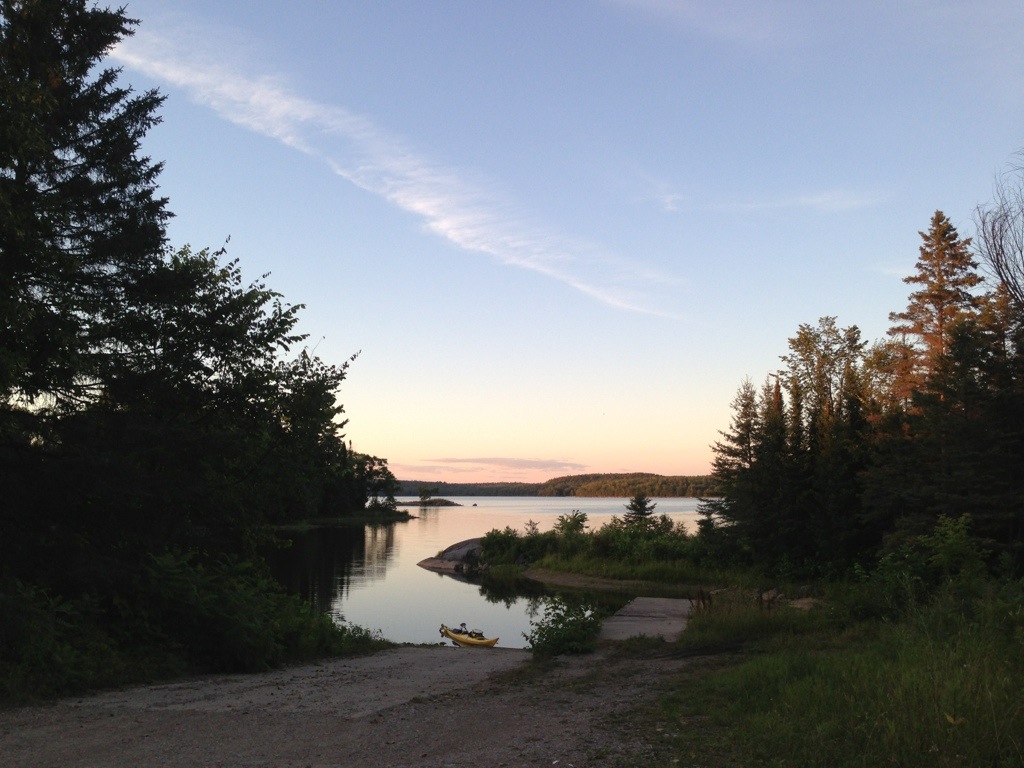 I stopped paddling, felt my momentum against the current slack then disappear, and let the world slip backwards.

Three miles. Three miles up swift, ripply water just to watch the river narrow and twist through a tight channel, to stare at the dam plugged across it, to search in vain for an old trail, to crawl through a reed-choked marsh trying to reach a road that was too far. Three miles just to turn around and go back, to cover the same ground, to feel bitter.

I floated backward and looked at maps, trying to figure out some way forward, someway past the wall. The Ottawa splits into two channels, the northern one with a dam, the southern one with miles of whitewater with no good roads around either, but there’s a third route, the one natives used before Montrealers turned the fur trade into a heavily laden industry with thirty-six foot long canoes and three tons of cargo.

A string of ponds and streams up to Muskrat Lake, a long, thin basin that drains back in into the Ottawa forty miles upstream, far beyond the whitewater and dam.

The string of lakes and streams were behind me and looked nightmarish, but a ten-mile walk could get me to Muskrat Lake.

I thought of my feet blistering on the portage into Montreal, of popping them with a needle and wrapping them in duct tape, of how the straps of my sandals wore my skin raw in places, how I felt exhausted for days.

“You only have so many of these in you, you know,” I said.

Ten miles looks so small on a map. You can run a finger across it in a heartbeat. It looks easy until you’re in it, but it’s a way forward.

Maybe. Maybe not. The Muskrat River draining the far side of the lake could be anything from a stream to whitewater to a mud puddle, it’s only a blue line on the map, a lot to hang a ten-mile portage on.

I found an old boat ramp at the end of a long dirt road and sat down to eat dinner as the sun set. The air felt cool, the water still. A pair of guys pulled up in a pickup truck with a small boat in the back to test out a motor. I asked them about roads and what kind of traffic would be on them.

Dirt roads most of the way, they said. Almost no traffic.

They wished me luck and I watched them motor down the river. It’s always hard to leave the water and I knew I’d think about this moment for hours.

I slipped the cart underneath the hull, lifted the bow, and pulled down the road into the darkness to find a way around the wall.