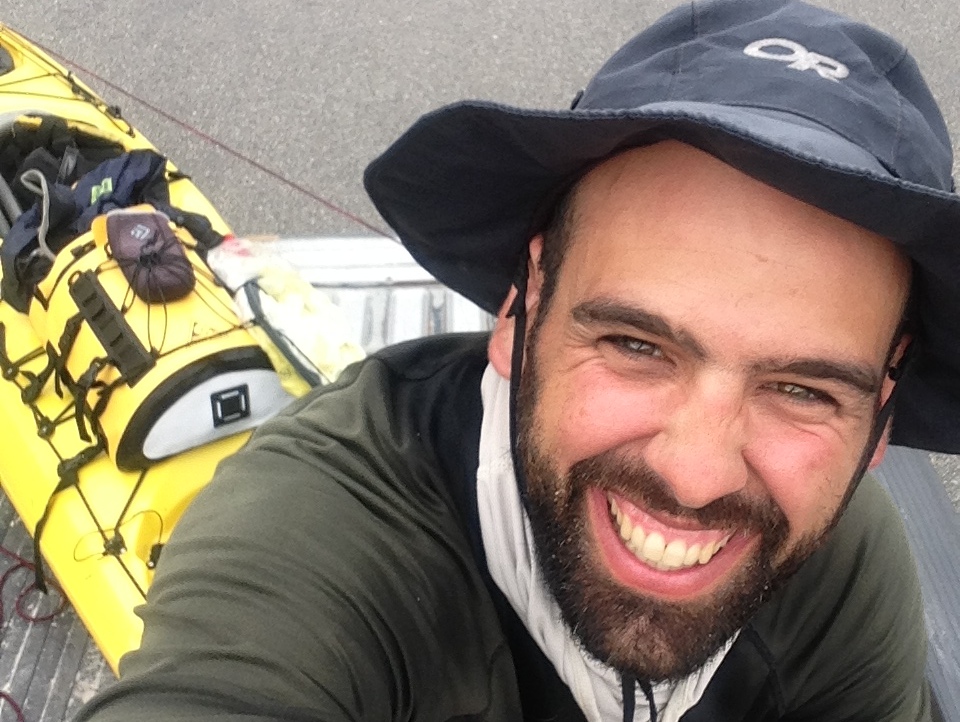 I wanted to hear it in a mock-stern voice. I wanted to convince myself that she was playing a joke, the way I might, like how I jumped out of the pickup truck, stretched out my hand, and introduced myself as the crazy person her husband found at the beach. But she wasn’t joking. She was stiff and tense and barely looked at me. She only stared at her husband, Keith, the whole time.

Keith’s boat was about five feet long and three feet wide. It looks almost square next to the Looksha’s seventeen foot hull, but it did what it was designed to do–get thrown in the back of a car and driven to the beach to float around in the water on calm days with just enough room to shove a few beers inside.

That’s where I met him, floating in the water off a Norfolk beach. Memorial Day crowds filled the shore, music poured out of a bar, but Keith had a bit of solitude out there on the water in that little blue boat. He paddled up to me, said hi, and asked where I was going.

I told him about Minnesota and Key West, what my plan was to get back through the Hudson in New York and how I’d have to wait until morning to cross Chesapeake Bay.

“Where you staying tonight?” he asked.

I shrugged and looked at the house-filled shore. I’d find a spot somewhere, but I knew I’d barely sleep. I’d wake at every sound and have to leave before sunrise, but that’s always been the deal, there will always be nights like that where I’m trying to be a shadow. I just don’t like talking about it.

“Well, I live a half mile back,” he said. “Why don’t you come stay with us, we’re having a big family dinner tonight.”

We slid the boat in the back of his pickup truck. Half of it hung off the tailgate so I crawled on top to hold it down and thought of Emma and International Falls and how fifteen minutes after I met her, I was hanging on the boat like a koala as she drove past the police station.

This time, I just sat on top and Keith drove slow. At a stop sign, I snapped a picture to go next to all the other pictures I have of transporting the boat to people’s houses. Swallowed by a moving truck, hanging out of a van, strapped to tiny cars, roped onto trailers, they will make a great slide show one day.

Then Keith’s wife met us in the yard.

I did my best to charm her. I threw all my credibility into it. Yale Law, the Outside Magazine grant, my card and website, an offer to call my mom to vouch for me, stories about accents along the Mississippi River, and paddling past aircraft carriers in Norfolk a few hours earlier, but it all washed up like waves against a seawall.

She turned and left. Keith backed the truck up to unload the boat.

“Keith,” I said. “I don’t want to cause you guys any trouble. I can just keep going…”

Then his son came out, a nice kid in his first year of law school.

They disappeared around back. I stopped untying knots and sat doen on the tailgate to wait. The ropes had already held once so I didn’t want to mess with them. Keith came back and I knew from his face.

“I don’t think this is going to work out,” he said.

Pain filled his voice. He felt bad on every side. He’d gotten caught up in this wild tale of adventure and wanted to be a part of it, to help push me forward somehow, to do a good deed, but no one else there understood that.

They didn’t watch me paddle up the beach. They didn’t sit in the water sharing stories. They didn’t look out at the Chesapeake Bay Bridge and Tunnels disappearing toward land beyond the horizon.

They saw a scraggly beard, a ripped black shirt, salt stains on black fabric, and a half-soaked man claiming to have gone to Yale Law School.

Keith stood there trying to figure something out, but there wasn’t anything he could do but take me back to the water.

“Keith,” I said, putting my hand on his shoulder. “Don’t worry about it. You tried to help. You did what you could. I understand.”

It’s not easy, you know, trusting a stranger. It takes faith. You have to fight through a lot of fears and some people aren’t up for it. Maybe they’ve got their reasons, I don’t know, but I feel for them. The unknown world is a heavy trade for a small, familiar piece, even if it comes with the illusion of safety.

We rode the half mile back to a parking lot next to the beach and unloaded the boat. Keith handed me a bottle of beer even though I don’t really drink.

“No glass allowed on the beach,” he said. “But just put it in the boat and no one will know.”

Then he shoved ten dollars in my hand.

He shook his head and pressed the money into my palm.

“No, I promised you a dinner,” he said. “Get a burger on me or something.”

I nodded and took the money, figuring it would make it a bit easier on him.

We shook hands, then I waved goodbye to a stranger turned friend.