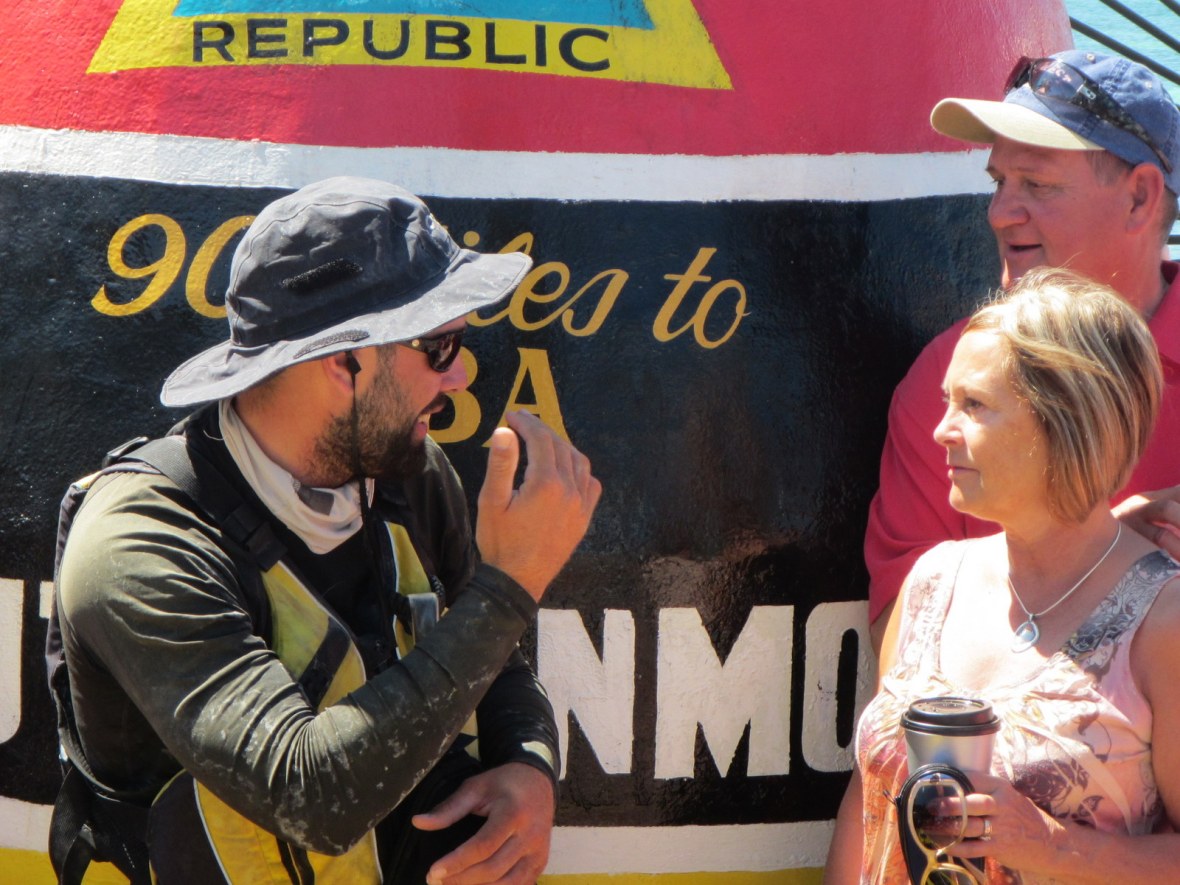 Sad the trip is almost over? Me too, but I’m sure the next adventure is coming soon. If you want to keep up to date, follow the blog via email (look for the link on the right side or bottom of every page), facebook, or twitter and you’ll know as soon as I’m lost again.

Four miles to a block of sand on the south side of Key West. White umbrellas and blue chairs. Bikinis and a golden man smiling in a golden thong. Tourists blinking at me in the sun. Hawaiian shirts and sunscreen. Nine months stripped to satisfaction.

“From where?” people say.

Word spreads across the beach. Couples stop. A man stares. I want to shrink into myself, but there is nowhere to go. So I blush and answer questions. I shake hands. I wave and take pictures.

It is strange to end the trip twice, but I’m glad that once was quiet and alone on that key ten miles away where I splashed in the water until a man in boxer shorts and a robe came out of the old house holding a rifle in one hand.

But at least I had those few precious moments where I thought I was alone.

A blonde woman in a black bikini tells me she’s from Montreal. Like a voyageur, I say. She says the word back to me in French. We take a picture together. She feels delicate underneath my arm. I feel like King Kong brought to shore.

The line is thirty people long at the Southernmost Point. It’s an old piece of metal painted like a buoy, but it says Southernmost Point and 90 Miles to Cuba so it make for a good picture even if it’s a lie. I move to the back of the crowd, dragging the Looksha behind me.

Someone yells that I came from Minnesota and waves me forward. I feel awkward jumping ahead, but I go. People cheer. My head spins. There are so many faces in the crowd to focus. I feel out-of-place. Salt hangs on my clothes in white swirls. It makes the fabric stiff. Only the Looksha feels real. Nothing else makes sense. The Looksha knows. Frank knows. Ali knows. I cling to them.

Clean faces and t-shirts. Sandals flap on pavement. Cameras flash and click. Straws stick out of coconuts. I move away and sit down for a moment. I rest my hand on the yellow plastic. I answer questions and talk about nothing. I don’t know what I’m saying. I don’t have words. People want to know how it feels. I say things, but no one hears anything real. They want quick answers. One or two sentences.

And even then you don’t understand.

9 thoughts on “Angle to Key West: The Other Southernmost Point (3/9)”