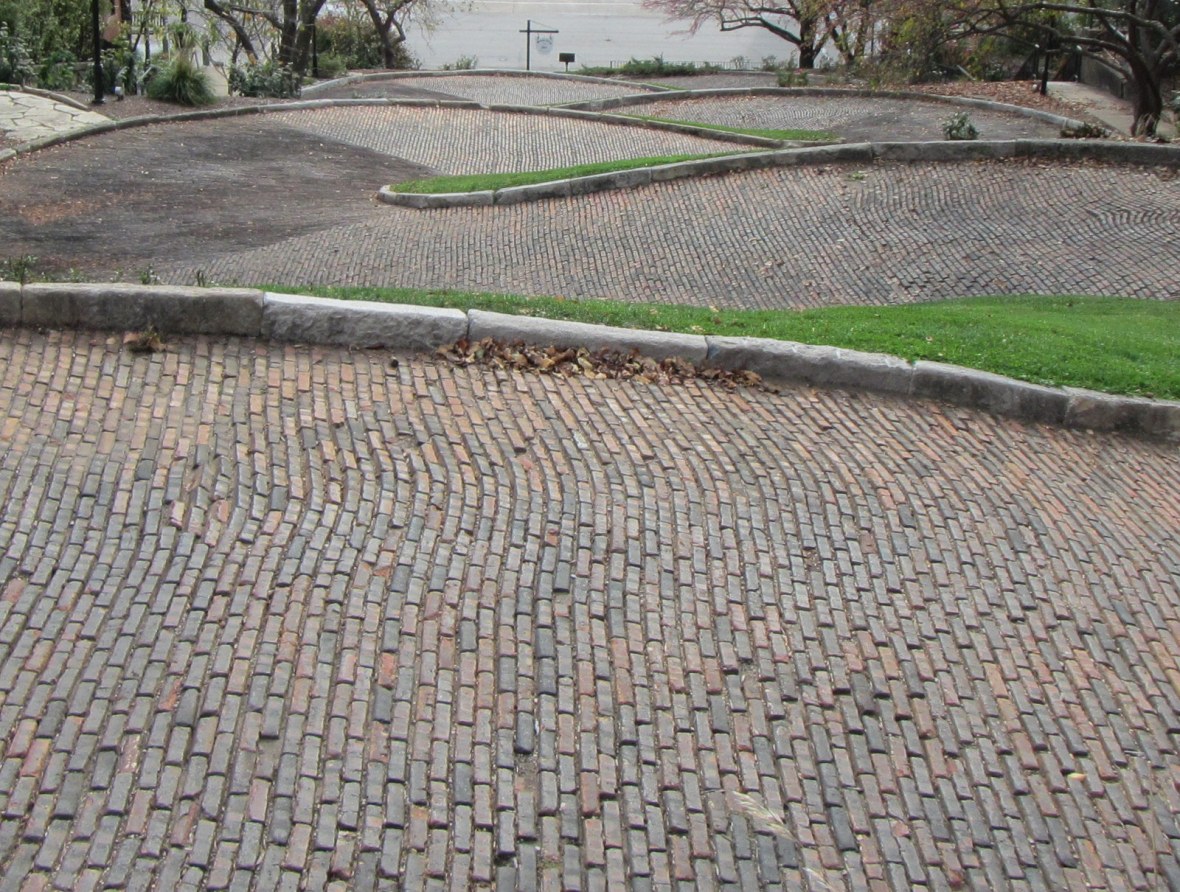 Burlington, Iowa, doesn’t have much on San Francisco, but it’s got a street to rival Lombard for the crookedest in the world.

It’s a winding brick path they call Snake Alley. Five half-curves and two quarter-curves will take you from the top of Heritage Hill to the bottom in 275 feet.

“It’s just up that street five blocks,” a woman told me, pointing me in the right direction.

Off I went in search of the “Crookedest Street in the World” according to Ripley’s Believe it or Not.

In Dubuque, I saw a shot tower, an old brick chimney looking thing, used to make lead balls for muzzle-loading rifles. They used to drip hot lead from the top so it would cool into balls as it fell. The tower did brisk business in the Civil War.

The pearl button manufacturing industry got its start in Muscatine, Iowa, when a man realized he could punch buttons out of Mississippi clam shells. He set up shop in 1891 and six years later, eleven button factories operated in Muscatine. There’s a statue to him on the riverfront and people still find old shells with holes punched through them.

At the Quad Cities, the river turns directly west for forty miles. People say it’s because the bluffs in the north are so beautiful the river turns to look at them one last time before heading south. They also say its due to glaciation, the way the last ice age carved the land, and gravity, but the bluffs are beautiful.

Bettendorf, Iowa, is where the events leading to the Dred Scott Trial got started.

Guttenberg, Iowa, has a copy of a Guttenberg Bible in the library for anyone to see.

McGregor, Iowa, is where the Ringling Brothers were born.

Cordova, Illinois, may or may not have gotten its name from an immigrant wood-cutter who didn’t know how to count past ten in English and would tell steamboat captains he loaded “ten cord ova‘ five” when he meant fifteen.

Prairie du Chien, Wisconsin, was an old voyageur trading post, but I didn’t look into it too much for fear of finding another portage.

Back in Burlington, I walked up the hill to Snake Alley, thought of San Francisco, and then began walking down the five half-curves and two quarter-curves for no other reason than it made me smile.