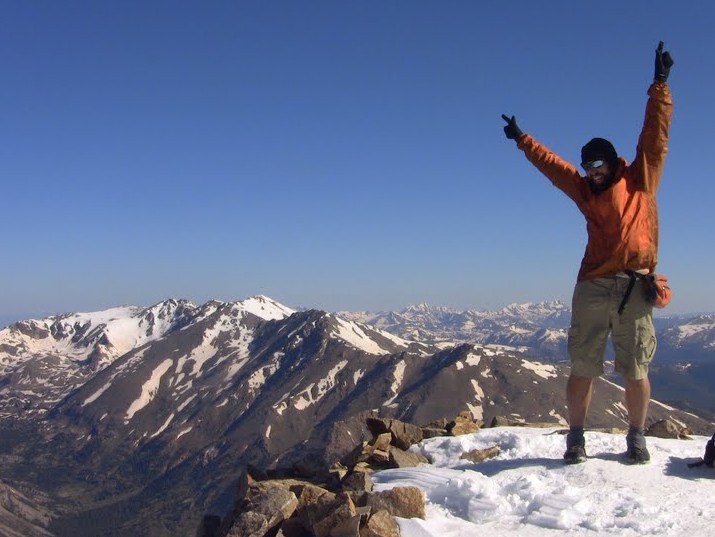 Before I left my dad handed me a black fleece hat he’d just gotten.

“You’ll need this,” he said. “It’s a good one, shaped to cover your ears when you wear it.”

“You lose all your heat through your head,” he tells me about once a year.

I took the hat and shoved it in my backpack then gave my dad a big hug.

He looked at me, smiled, and squeezed my shoulder one last time.

I gave him another hug to keep myself from crying.

The next morning, I started the Appalachian Trail with that hat on my head.

It made it all the way to Katahdin then sat in a trunk of gear next to books on constitutional law while I sat at a desk and daydreamed about mountains. A year later, I brushed it off for the last three weeks of summer vacation to hike the John Muir Trail with my girlfriend.

We broke up three times on the hike, but the hat made it to the top of Mt. Whitney unscathed where it kept me warm as I watched the sunrise over a sea of mountains.

The next summer, when my mom decided to hike the John Muir Trail. I gave her the hat because I worried about her all alone up there in the Sierras and figured the hat already knew the way.

Then I gave her a giant hug and said goodbye.

She thought she’d lost the hat, even after tearing through her pack, but eventually she found it stuffed in a pocket after she gave up hope. She made it to Whitney too, stood on the highest point in the Lower 48, then handed my hat back to me a few days later.

“Kept me warm the whole time,” she said.

When I packed my backpack mid-semester to start the Pacific Crest Trail, the hat came with me. Then U.S. Air lost it and the rest of my gear and I got the nickname “Out of Order.” I could replace everything in that pack except the hat, so I was excited to see it 200 miles down the trail when U.S. Air found my bag after a week of searching. I promised to never check it on another flight.

Then the hat slipped out of my pack just south of Agua Dulce. I still remember reaching for it and feeling nothing, reaching again, then tearing apart my pack looking for it. I turned out every pocket, but it was gone, left in the dirt somewhere, and I knew I’d never see it again.

Until a man from Japan named Kim pulled it out of his backpack a day later and handed it to me.

“I think you dropped this,” he said.

When it started snowing five months later as I walked across the Canadian border, the hat kept me warm like it always has.

It was the first thing in my gear pile as I packed for the Continental Divide. It was there in the southernmost bar in the world after circling the Dientes in Chile. It crawled over, inside, and through 850 miles of canyons on the Hayduke Trail in southern Utah.

It kept me warm, each and every time, just like my dad had promised.

Then I reached in my deck bag this morning, hands numb and trembling in the cold, and the hat wasn’t there.

I reached again and again, shoving gear around, expecting to feel that bit of fleece with each grab, but it never came. I thought my fingers were too numb to feel it, so I pulled the bag out and stared inside.

The hat was gone, lost to the mighty Mississippi.

I took a deep breath to calm myself, to tell myself that it was just a hat, that I could get another in the next town, but it was all lies. I wanted to quit. I know it sounds crazy, quit over a hat, but there’s something to it, luck matters out here.

I sat in the water, floating and holding that deck bag, staring into it, shivering. The wind, the rain, it all felt suddenly cold, like it could get to me.

I could hold that bit of black fabric in my hands and remember all the difficult places, all the cold nights, all the snow fields and windstorms, every bitter moment that I’d survived. I always knew I’d be ok because I had that hat. I believed in it and that made it true.

I found a quiet campsite and pulled the boat onto shore for the night, struggling to open hatches with numb fingers. I threw off my life vest and skirt, then grabbed my jacket and saw a bit of black fleece stuffed in a pocket.

The hat, warm as ever, just like my dad promised eight years ago.