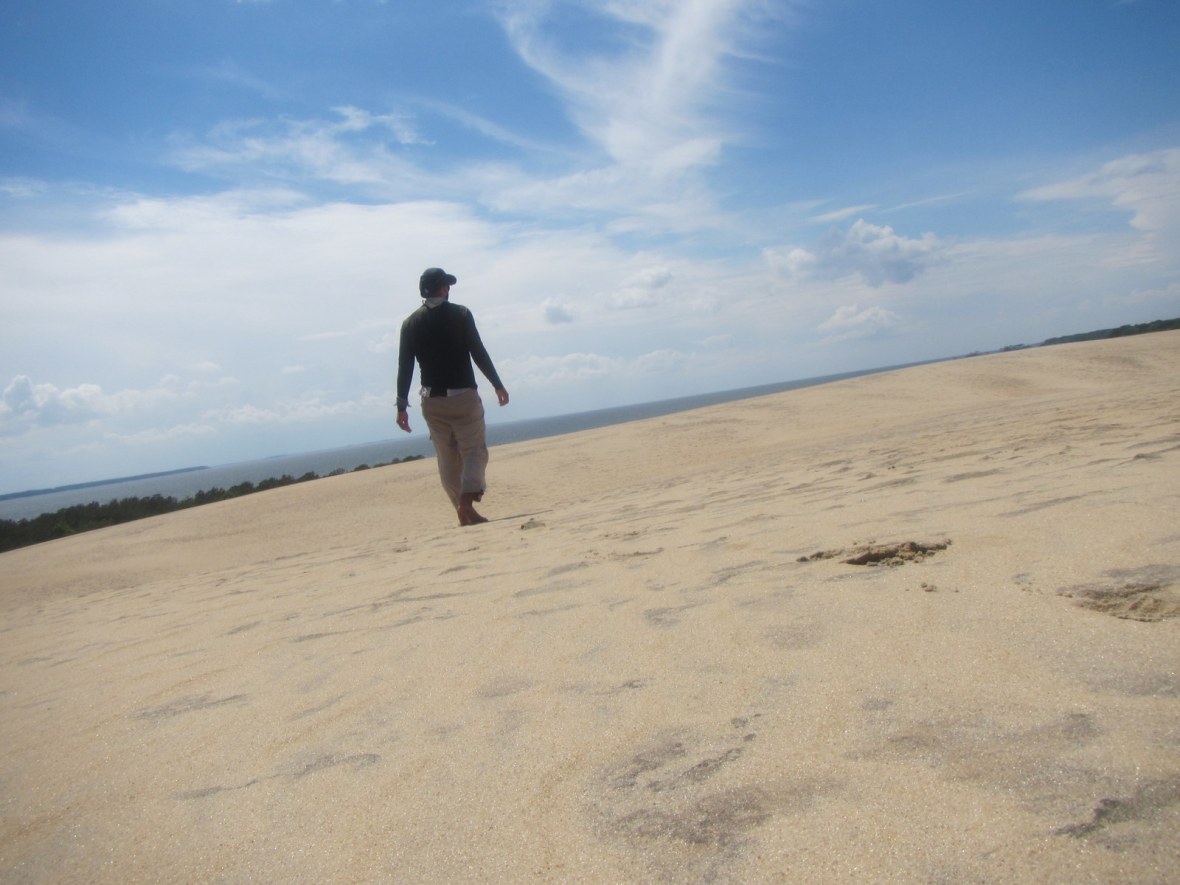 I followed the dune’s curve upward, rising above the trees and watching the water in the Atlantic and Albemarle Sound fall away to either side. Wind ripped across the sand. A white haze of shifting grains blurred the line between earth and sky. I climbed higher and higher until the world looked small underneath me.

Some people say the dunes are called Jockey’s Ridge because they’d race wild ponies and people would sit in the sand to watch, turning the slopes into makeshift stadiums. Others say a horseman would ride at night with a lantern, swinging it back and forth to trick ships into crashing ashore so locals could salvage the cargo. Maybe it was a little of both, but now they’re a giant playground.

You feel like child on top. You forget who you are and just run and dive and tumble in the sand. You want to watch kites soar in the wind, look down at the ocean waves for hours, and hold your hands out like you’re flying through the sky. It’s a magical place. It’s the fountain of youth.

Or maybe it doesn’t exist.

Bulldozers came in 1973. They plowed and shifted it down, smoothed the once giant dune flat for driveways and houses on stilts. Dump trucks carried load after load of sand into nearby marshes to raise new land for development. Surveyors cut acreage into million dollar plots. More houses went up. Condos rose off concrete slabs. Someone built a gas station where the ridge used to rise a hundred feet high.

But no, the dunes do exist.

That first bulldozer came back in 1973. Three kids saw it as they tumbled and played on top of the ridge. They ran home to tell their mother, Carolista Baum, and she marched into the sand, stood in front of the bulldozer, and refused to move.

The man argued with her for a bit, turned off the engine, and left, figuring she’d be gone the next day, but she wasn’t.

She refused to leave. She made phone calls, went door-to-door with petitions and hand painted signs. She handed out bumper stickers, organized meetings, wrote letters, and raised money. She drove to the the capital again and again to pester politicians and beg for votes. She fought with everything she could. Weeks passed, months, years, but that bulldozer never started up again.

I stood in the sunlight with my arms stretched out in the air. A hundred feet of sand rose underneath my feet. The Atlantic crashed in the distance. I did cartwheels in the sand. I watched kites dip and swirl across the sky. I laughed and smiled and felt alive because Carolista Baum refused to move.

Friends of Jockey’s Ridge State Park is a non-profit that works to support and protect the park that Carolista Baum had to stand in front of a bulldozer to save. Visit their webpage to find out how you can support their efforts.

And in the spirit of Carolista Baum, think about what you can to to help the places you know and love. It doesn’t have to be standing in front of a bulldozer, but do something, no matter how small, even if it’s donating a few dollars or picking up trash one afternoon.

I don’t have the funding to donate as much to non-profits that protect the route back to the Angle as I did on the way down, but I stood on top of that dune and decided I could miss a few restaurant meals if it means contributing something to help protect such a unique place.

What can you do to help the places that are important to you?